The Leader in an address to Iranian nation:

Arrogant powers’ oppression should not be neglected due to virus 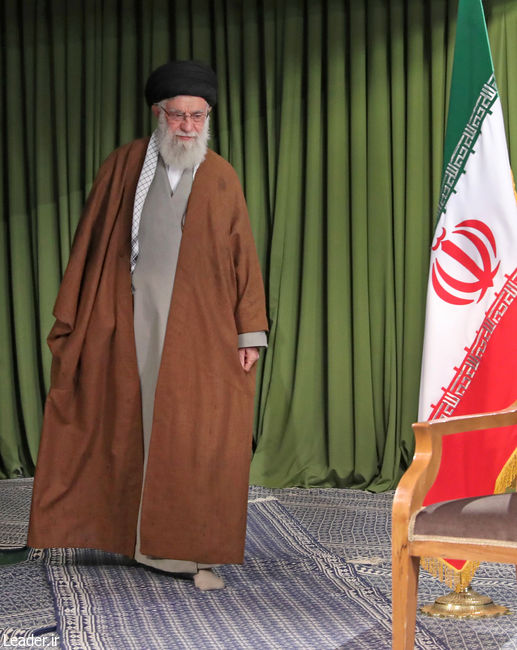 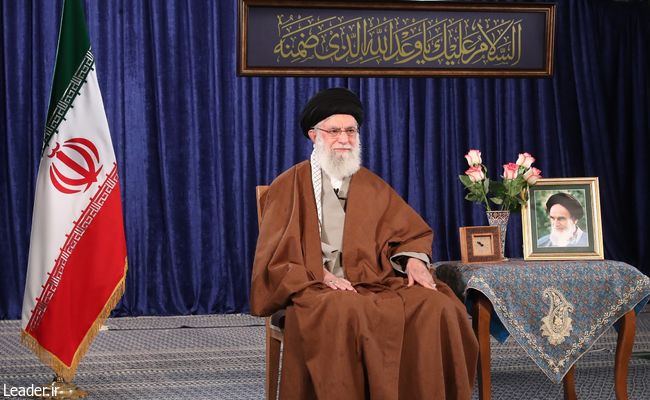 On the occasion of the anniversary of the birth of the Imam of the Age (may Allah hasten his reappearance), Ayatollah Seyyed Ali Khamenei, the Supreme Leader of the Islamic Revolution addressed the nation in a live TV broadcast on Thursday- April 9, 2020.

In expressing his congratulations to the Iranian nation, Muslims and all freedom-loving people in the world on the anniversary of the birth of the Imam of the Age (‘a.j.), Ayatollah Khamenei stated, “The conscious need of intellectuals throughout the world and the unconscious need of the masses of the people for a ‘divine hand of power, an Infallible Imam and the lofty truth of the promised Mahdi’ indicates that different schools of thought and philosophies have failed to bring nations tranquility and bliss despite the extravagant claims they make.”

Referring to the various problems that human societies are facing despite scientific breakthroughs, Ayatollah Khamenei said, “Injustice, poverty, disease, decadence, sins, deep rifts between classes and the misuse of science by world powers have caused the human community to feel exhausted, anxious and troubled, and the feeling of a need for a saving hand throughout the world has reached a peak.”

The Leader described science, wisdom and experience as great divine blessings, which solve many problems, but he also pointed out, “As has been proven up until today, science and wisdom cannot untie the knot of injustice. The fulfilment of this continual dream requires the hand of divine power. It is for this reason that the great mission of the Imam of the Age is to fill the earth with justice.”

He stated that the promised justice at the time of the Reappearance of the Imam of the Age (‘a.j.) will manifest itself in all aspects of human life, including in the areas of power, wealth, health, dignity and social status, adding: “By Allah’s favor and grace, this promise will surely be fulfilled with the Imam of the Age’s hand of power.”

Referring to the promise of “relief and a great divine movement” in all religions, the Supreme Leader said, “’Awaiting the Imam’ in Islam is a constructive anticipation which is accompanied by hope, movement and action. It is for this reason that the Holy Prophet and the Infallible Imams have stated that ‘Awaiting the Imam’ has a very important position and is the best of actions.”

Ayatollah Khamenei described Awaiting the Reappearance of the Imam of the Age (‘a.j.) as being the most important manifestation of “Awaiting” and added, “Of course, awaiting the Reappearance and relief must be reflected in all affairs of life. It is for this reason that awaiting is a relief in itself, because it saves humans from despair and hopelessness.”

He stressed that Prophet Mohammad’s (pbuh) nation should never become disappointed and hopeless in any event, “Awaiting does not mean sitting idly, taking no action and watching for something to happen. It means preparing and being active to achieve that bright, promised future.”

The Supreme Leader of the Islamic Revolution reiterated that true Awaiting the Imam is in sharp contrast to showing impatience or setting a specific timeline for the Reappearance of the Imam, stating: “In preparing oneself for the relief brought by the Imam, showing impatience and haste are forbidden because God does not make decisions on the basis of human beings’ haste and impatience. In addition, there is a specified time and wisdom for every event, and divine decisions are made on the basis of this.”

Ayatollah Khamenei also pointed to the conditions that have arisen following the outbreak of the Coronavirus and added, “Awaiting the Imam also means the coming of relief and salvation after difficulty. Therefore, those who are awaiting the Imam do not become disappointed and anxious due to these events, and they know that this situation will surely change.”

He emphasized the importance of supplications in increasing the tranquility of those who are awaiting the Imam, “For the two blessed months of Sha’ban and Ramadan, there are numerous supplications with lofty meanings. Therefore, we can attract divine mercy and feel more tranquil by praying and supplicating God, and also by speaking to the Infallible Imams.”

The Leader of the Islamic Revolution referred to the Iranian nation’s prayers Wednesday night on the eve of the anniversary of the birth of Hazrat Mahdi (‘a.j.) and added, “The millions of hands that were raised last night, in speaking to and supplicating God, will surely and undoubtedly help attract divine mercy and lead to many individual and social blessings.”

Elsewhere in his statements, the Supreme Leader of the Islamic Revolution spoke of the Coronavirus outbreak, and stated that it is a strange test for all governments and nations, “Enough has been said about the statistics, the very good actions that have been taken, and the recommendations. The IRIB has also performed well in this regard, but the important point is the brilliant performance of the Iranian nation in facing this modern form of Cholera.”

Ayatollah Khamenei described efforts by Iran’s health professionals as the peak of the national glory, and said, “By enduring the hardship of being away from their families, even during the Nowruz holidays, and by tolerating the pressures resulting from treating patients in critical condition, the health professionals of the country placed their lives and their health at the service of the people. This very significant matter will leave a good memory in the minds of the people of Iran.”

The Leader of the Islamic Revolution described the voluntary presence of hard-working clergy and students, thousands of diligent Basij and also the masses of the people to offer help to the health professionals, patients and even the needy as being very valuable and cheering. In this regard, he said, “The Armed Forces too truly used all their powers in construction and creativity, including equipping hospitals and infirmaries by manufacturing medical equipment. Moreover, the Armed Forces and the youth, besides those in the Armed Forces, displayed new capacities in confronting this matter.”

He described the cooperation of the people throughout the country as being beautiful and astonishing, and added, “All these valuable movements show the depth of the influence of Islamic culture on the people. In opposition to the desire of some people who have endeavored to humiliate the Islamic-Iranian culture in the course of the past two decades and to divert attention towards the western lifestyle, these moves showed that the Islamic culture and the chain of Islamic values are very strong and firmly rooted in the people of Iran.”

The Supreme Leader of the Islamic Revolution pointed to the behavior of the western world during the Coronavirus outbreak and referred to the confiscation of masks and gloves by the American and some European governments, people overrunning stores to empty the shelves, people fighting each other for a few rolls of toilet paper, plus lining up to buy weapons, the governments’ refusal to treat the elderly and also people’s suicide attempts. He went on to say, “In this event, the western culture and civilization have shown their true nature, which is the natural consequence of the philosophy governing the western civilization, a philosophy that is founded on individualism, materialism and mostly atheism.”

Quoting a western politician who has said that the wild west has been revived, Ayatollah Khamenei stated, “When we say that the west has a savage spirit despite its clean-cut, perfumed appearance, some people deny this. But now, they themselves are acknowledging this openly.”

Speaking about another dimension of the Coronavirus outbreak in the country – the people acting in accordance with the recommendations – the Leader mentioned, “The people are truly acting in accordance with the firm recommendations of the National Committee on Combating Coronavirus. Of course, officials may announce something to the people, which they have doubts about, and the people may come to the conclusion that it is not necessary to do it. However, when something is announced firmly, the people cooperate. An example of this was the people’s decision not to celebrate the last day of the New Year holiday by not going out and to respect the public order. Of course, this conduct should continue and the decisions announced by the National Committee on Combating Coronavirus should be taken seriously and followed.”

He continued on to say, “The Coronavirus is a grave problem and a dangerous disease for humanity, but this incident should not cause us to ignore other important problems and events in the world. Because, in recent years, the world and our country have been faced with bigger problems and incidents.”

One of these tragedies was the chemical weapon attack launched by Saddam’s airplanes on the city of Halabcheh and some border areas of Iran, “At that time, some of the countries, which were making big claims about civilization and progress, provided Saddam with chemical weapons. Up until today, none of them has given any answers for the crimes they committed back then.”

According to The Leader, WWI, WWII, the Vietnam War and the US attacks on Iraq are examples of other important and grave events in recent decades. He stated, “The Coronavirus outbreak should not cause us to neglect the oppression and tyranny of the superpowers in the world against different nations including the Palestinian and Yemeni nations. We should also not neglect the conspiracies and enmity of the Arrogant Powers, because unlike the notion that some people have – saying that if we don’t show enmity, they won’t either – the enmity of the Arrogant Powers is with the essence of the Islamic Republic and religious democracy.”

Pointing out the serious efforts made by the officials in the National Committee on Combating Coronavirus, Ayatollah Khamenei said, “In the National Committee on Combating Coronavirus, some decisions have been made for the underprivileged classes of society. I advise them to implement these plans as soon as possible and in the best way they can. Of course, the people are responsible for helping the underprivileged classes as well.”

Referring to the problems caused by the Coronavirus outbreak and the fact that it has made life difficult for some classes of society, the Supreme Leader said, “People who are well off financially should start large-scale activities to help the needy, especially on the eve of the auspicious month of Ramadan, which is the month of giving alms and helping others.”

He stressed, “In the holy month of Ramadan, it would be good to carry out an extensive maneuver to give help, show sympathy and provide sincere assistance to the needy and the poor in society. In order to show our love for the Imam of the Age (‘a.j.), we should create an image and reflection of the society of Imam Mahdi, which is a society of justice, dignity, science, brotherhood and cooperation.”