The televised speech on the International Quds Day

Palestinian militants can hold a referendum 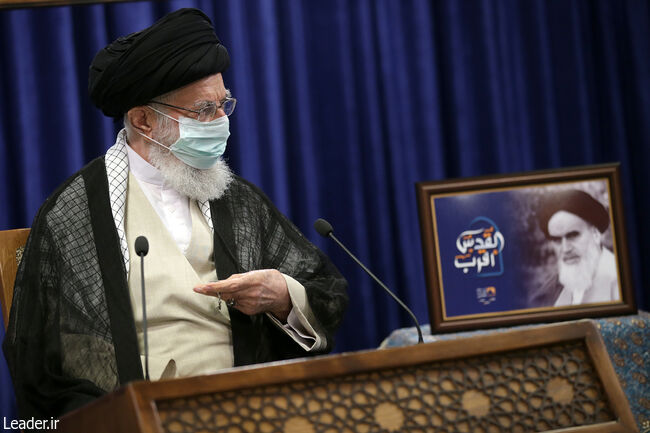 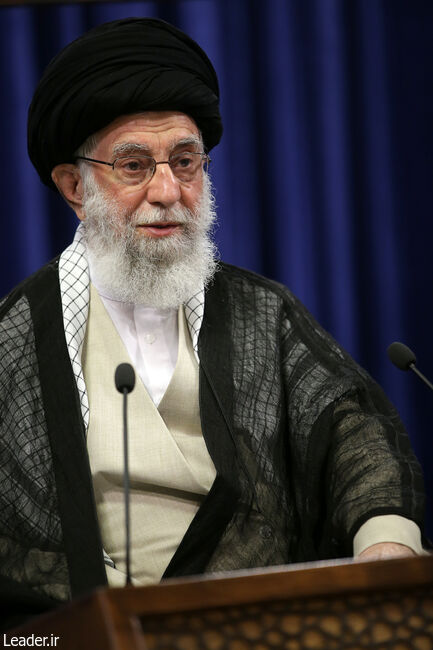 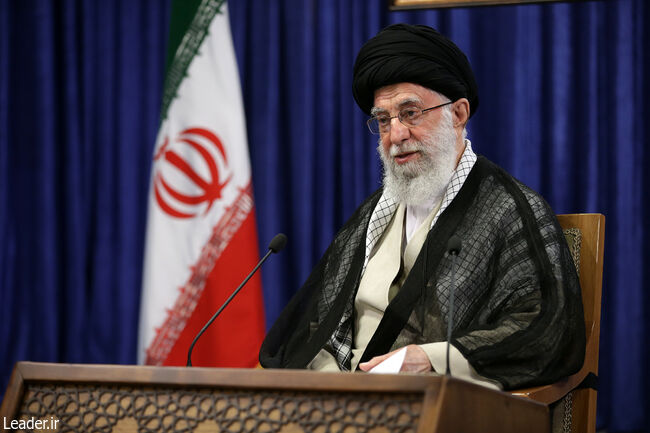 On the last Friday of the holy month of Ramadan called International Quds Day, the Supreme Leader of the Islamic Revolution, referring to a severe shift in the balance of power in favour of the Islamic world and the Resistance Front, and on the contrary, the decline in the power of America and the occupying regime and, did not regard normalisation of relations between a few weak states and the occupying regime as an obstacle to the downfall of this regime, and emphasised on the logical implementation of the referendum demand of all the principal inhabitants of Palestine to determine the political system of this country, and addressed the Palestinian Mujahideen: Continue your legitimate and moral struggle against the usurper regime until he is forced to accepts this progressive demand.

Ayatollah Khamenei considered the Palestinian issue as the most essential and living common issue of the Islamic nation and said: The policies of the oppressive capitalist system have cut off the hand of a nation from its home and have placed a terrorist regime and foreign people in it.

Referring to the feeble logic of the establishment of the Zionist regime, the Leader of the Revolution added: "The Europeans claimed to have oppressed the Jews during the Second World War, but they say the revenge of the Jews should be taken by displacing a nation in West Asia and committing atrocities in that country. In this way, they have proscribed all their false claims about human rights and democracy.

Recalling the fact that "the Zionists turned Palestine into a base of terrorism from day one," he added: "Israel is not a country but a terrorist garrison against the Palestinian people and other Muslim nations; therefore, the fight against it is the fight against oppression and terrorism and is a public duty.

Ayatollah Khamenei, referring to the events before the establishment of the usurper regime, "the active intervention of the West in the region and the empowerment of authoritarian or dictatorial governments", considered the weakness and division in the Islamic nation as the basis for the usurpation of Palestine and added: Capitalism and communism increased with the Zionist Korahs; Britain devised the principle of the conspiracy, which the Zionist capitalists carried out with money and weapons and  The Soviet Union was the first government to send large numbers of Jews thereafter recognising the illegitimate government.

The Leader of the Revolution described the current state of the world and the balance of power in favour of the Islamic world, citing political and social events in Europe and the United States, such as the "US election and the scandal of its ambitious leaders" and the "failed US-European confrontation with the pervasive corona and its embarrassing fringes" added: "These are signs of the decline of the western camp."

He called the opposite of these disorders in the West the promising increase in the capabilities of Islamic nations. He said: the growth of resistance forces in the most sensitive Islamic regions and the growth of their defence and offensive capabilities, the development of self-awareness and hope in Muslim nations, the growth of incline to Islamic slogans, scientific growth and independence, self-reliance in nations promises a better future.

Ayatollah Khamenei stressed the need for Muslim countries to unite around the Palestinian issue and the fate of Holy Quds, saying: "This unification is a nightmare for the Zionist enemy and its American and European supporters. The failed plan of the century deal and the attempt to normalise the relations of several weak Arab states with the usurping regime are desperate attempts to escape that nightmare.

The Leader of the Islamic Revolution emphasised: I firmly say these efforts will not succeed, and the downward and declining movement of the Zionist regime has begun and will not stop.

He called "the continuation of resistance inside the Palestinian territories and the strengthening of the line of jihad and martyrdom" and the "global support of Muslim governments and nations for the Palestinian Mujahideen" two crucial factors determining the future, adding:  Intellectuals, scholars, parties, groups and youth must find their place in it and play a role.

Ayatollah Khamenei dedicated another part of his speech in the Arabic language addressing the Arab youth. He greets and salutes all the Arab Independent figures, especially the youth, the resilient people of Palestine and Quds, the relatives in Al-Aqsa Mosque, as well as the martyrs of the resistance, especially Sheikh Ahmad Yassin, Seyyed Abbas Mousavi, Fathi Shaghaghi, Emad Mughniyeh, Abdul Aziz Rantisi, Abu Mahdi al-Mohandes and  Prominent face of the martyrs of the resistance, Martyr Qassem Soleimani.

The Supreme Leader of the Revolution attributed the struggle of the Palestinians and the pure blood of the martyrs to raising the flag of resistance and increasing the internal strength of the Palestinian jihad hundreds of times and said: A young Palestinian, who once defended themself by throwing stones, today responds to the enemy by launching the most precise missiles. Emphasising 70 years of occupation, racism, murder, looting, imprisonment and torture of honourable people could not defeat the will of the Palestinians, he said: Palestine is alive and will continue the jihad and the Holy Quds, and all Palestine will return to its people.

Ayatollah Khamenei considered all Islamic governments and nations responsible for the Palestinian issue and added: "Of course, the focus of the struggle is the Palestinians themselves, who today number about 14 million inside and outside the country, and their unity and determination can do a great job."

The Leader of the Islamic Revolution called unity the greatest weapon of the Palestinians and emphasised its preservation within the Palestinian community, noting that the axis of this unity should be internal jihad and distrust of the enemies. Also, the main enemy of the Palestinians, namely the United States, Britain and the evil Zionists, should not be the basis of Palestinian politics.

Emphasising the strategy of integrating all Palestinians in Gaza, Jerusalem, the West Bank, the 1948 territories and the camps, he added: "All Palestinians form a unit and must use the tools at their disposal to defend each other in times of pressure.".

Citing promising examples of a shift in the balance of power in favour of the Palestinians and the deep and all-encompassing weakness of the Zionist regime, Ayatollah Khamenei said:  The Zionist army, which described itself as "an army that will never fail," has today become an army that "will not see the colour of victory."  In politics, there are inevitably four elections in two years, consecutive failures in security, and the growing desire of Jews to reverse immigration has been the scandal of that pretentious regime". The Supreme Leader of the Revolution called the US-backed efforts of the usurper regime to normalise relations with some weak and despicable Arab countries another sign of the regime's weakness and said: "These relations will not help the Zionist regime, same as the relations with Egypt decades ago but it has become much weaker and more vulnerable."

He added: "Of course, those countries will not benefit from this relationship either, because the Zionist enemy will spread corruption and insecurity in them by seizing their property or territory."

Ayatollah Khamenei emphasised: Muslim and Christian scholars should declare normalisation as forbidden, and intellectuals and independent figures should explain to everyone the consequences of this betrayal, which is a dagger to Palestine from behind. The Leader of the Revolution considered the opposite of the downward trend of the usurper regime as increasing capabilities of the Resistance front and said: improving defence and military power, self-sufficiency in building effective weapons, the self-confidence of the Mujahedeen, increasing youth self-awareness, expanding the circle of resistance throughout Palestine and beyond, the recent uprising of the youth in defence of Al-Aqsa Mosque, and the simultaneous reflection of the struggle and oppression of the Palestinian people in the public opinion of many parts of the world, herald a bright future. He called the logic of the Palestinian struggle "the referendum of all the main inhabitants of Palestine to determine the country's political system" a progressive and attractive reason. He said: according to this logic, which the Islamic Republic in UN documents has recorded, Palestinian militants can hold a referendum with the participation of all significant Palestinian residents of all ethnicities and religions, including Palestinian refugees. The result of this referendum determines the political system of the country.  That political system returns the displaced and decides the fate of the settled settlers. Ayatollah Khamenei, emphasising the pursuit of this progressive, inviolable demand based on common democracy, said: The Palestinian Mujahedeen must continue their legitimate and moral struggle against the usurping regime until they are forced to accept this demand.