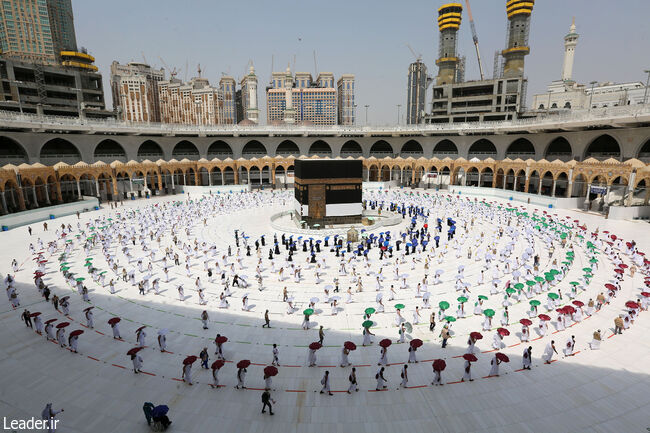 The Leader of the Islamic Revolution in his message of Hajj :

In a message to the Muslims of the world on the occasion of Hajj, Ayatollah Khamenei called the continuation of the longing of eager hearts to attend the pilgrimage as a passing test, and he stressed that the messages of Hajj should not be fade,  including the statement of resistance against arrogant powers, especially the United States.

Referring to the problems and misfortunes of the Muslim world, he called the rise of the elements of resistance and awakening, especially in Palestine, Yemen and Iraq, as some of the hopeful realities of the region and emphasized: Allah's true promise of divine support is for those who struggle in His way, and the first effect of the struggle is to stop evil powers from interferences in Islamic countries.

The whole message of the Leader of the Islamic Revolution is as follows:

In the name of God, The most beneficent, The Merciful

All praises belong to Allah, the Lord of the worlds, and peace be upon Muhammad, his purified family, his chosen companions, and those who follow them with goodness until the Day of Judgment.

Dear Muslim brothers and sisters around the world!

This year, again, the Muslim Ummah is deprived of the great blessings of Hajj, and eager hearts, with sighs and regrets, lost the banquet of the honourable house that God, the Wise and Merciful, has built for the people.

It is the second year that Hajj's season of joy and spiritual prosperity turns into the season of separation and regret. The pandemic, and perhaps the plague of governmental policies, deprives the eager eyes of the believers of enjoying the blessings of Allah's house, the symbol of unity and greatness and spirituality of the Islamic Ummah. Unfortunately, the current situation covers this glorious peak with clouds and dust.

This is, of course, a passing Test, like other passing tests in the history of the Islamic Ummah, which can lead to a bright future; It is essential that Hajj, in its true form, survives in the hearts and souls of Muslims. Now although its ritual form is temporarily absent, but its sublime message should not be diminished.

Indeed Hajj is mysterious worship. The beautiful combination of movement and stillness of the Hajj generates the identity for the Muslim individuals as well as the Muslim Societies. It demonstrates its beauties to the entire world. Hajj, On the one hand, cleanses the servants' hearts spiritually and brings them closer to God through remembrance, humility and supplication. Hajj also unites the brothers who have come from worldwide with the same covering and movement and coordinated movements. On the other hand, it puts the supreme symbol of the Muslim Ummah's Unity in front of the world with all its meaningful and mysterious rituals. It impresses the ill-minded (enemies) by demonstrating the determination and greatness of the Ummah.

We, the followers of Islam, who today have a vast population, a vast land, innumerable natural resources, and living and awake nations, must shape the future with our resources and possibilities. In the last 150 years, Muslim nations have played no role in the fate of their countries. Governments, with few exceptions, have been entirely ruled by the policies of the aggressive Western governments and have been subjected to their greed, interferences and malicious activities.

Today the backwardness of science and technology and political affiliation of many Muslim countries is the product of the weak and corrupt rulers. Our nations, our youth, our scientists, our religious scholars and civic intellectuals, our politicians, our political parties and communities, must come together and compensate for that shameful past; Today, we must stand up and "resist" against Coercion, interferences and evil acts of the Western powers.

The only reason why the arrogant powers are worried about the Islamic Republic of Iran is its invitation to all Muslims for this type of resistance: resistance against the intervention and evil acts of the United States and other aggressive powers to take back the control of the future of the Islamic world based on Islamic teachings.

Obviously, the United States and its allies are sensitive to the term of "resistance" as they have done various types of hostility against the "Islamic Resistance Front." The association of some regional governments with the arrogant powers is also a bitter reality for the continuation of those evil acts.

The straight path that the rituals of Hajj such as circumambulation around Kaaba, staying in Arafat, Stoning to devils, demonstrating the unity of Hajj etc. show us to trust in Allah, focus on the eternal power of Allah, gain self-confidence as a victorious nation, believe in efforts and struggles, to have the determination to move forward, and to have great hope for victory.

The actual facts that exist in the Islamic region increase the hope and strength of determination. However, on one hand, the misfortunes of the Islamic world, scientific backwardness, political affiliations, and the economic and social unrest, put us in front of a significant task and a tireless struggle; Occupied Palestine calls for our help; The oppressed and bloody Yemen hurts the hearts; Afghanistan's plight worries everyone; The bitter events in Iraq, Syria, Lebanon, and some other Muslim countries where the hand of evil and the intervention of the United States and its allies are evident, inspire the zeal and diligence of the youth, and on the other hand, the rise of resistance elements in all this sensitive region, and The awakening of the nations, and the motivation of the young and vibrant generation, fills our hearts with hope; Palestine draws the "Sword of Jerusalem" from all sides in all its parts; Jerusalem, Gaza, the coast, the lands of 48, and the camps all rise up and rub the aggressor's nose on the ground for twelve days; The besieged Yemen endures seven years of war, crime, and oppression of the evil enemy, and despite the famine of food, medicine, and living facilities, it does not give in to the oppressors and terrifies them with its authority and initiative; In Iraq, the elements of the resistance are pushing back with a clear and unequivocal language, the occupying United States and ISIS, and expressing their firm determination to counter any kind of interference and evil from the United States and its allies.

American propaganda tries to distort the determination and action of zealous youth and elements of "resistance" in Iraq, Syria, Lebanon and other countries and tries to link it to Iran or any other source, While it is an insult of those brave and awake youth. It shows that The Americans have no good understanding of the nations of the region.

This lack of understanding led to the humiliation of the United States in Afghanistan. They entered Afghanistan nearly twenty years ago and used weapons, bombs, and fire against defenceless and civilian people. They finally found themselves in a Swamp And decided to withdraw their forces and military equipment from it. Of course, the Afghan nation must be vigilant about US intelligence tools and soft weapons in the country and stand vigilantly against them.

The nations of the region have shown that they are awake and vigilant, and their approach is separate from their governments that, in order to satisfy the United States, even comply with its demands on the vital issue of Palestine; the Governments that, openly and covertly, make strong ties with the usurping Zionist regime, that means, they deny the right of the Palestinian people to its historical homeland. This is a robbery of the Palestinian capital. They did not stop at plundering the natural resources of their own countries, and now they are plundering the wealth of the Palestinian people.

Our region and its rapid and varied events are an exhibition of lessons; On the one hand, the power resulting from the struggle against the aggressive powers, and on the other hand, the humiliation resulting from the submission and expression towards the arrogant powers out of weakness and acceptance of their impositions.

The True promise of God is to support those who struggle in the way of Allah as He says:

"If you support Allah, Allah will support you, and He strengthens your feet" (The Holy Quran, Chapter47, Verse 7).

The first effect of this struggle is to stop the United States and other international oppressors from interfering in Islamic countries, God willing.

I ask Allah The Almighty for the victory of the Muslim nations, and I send greetings to Our Imam of the Time (as) and ask Allah to exalt the ranks of the great Imam Khomeini and the great martyrs.

Peace be upon the righteous servants of Allah