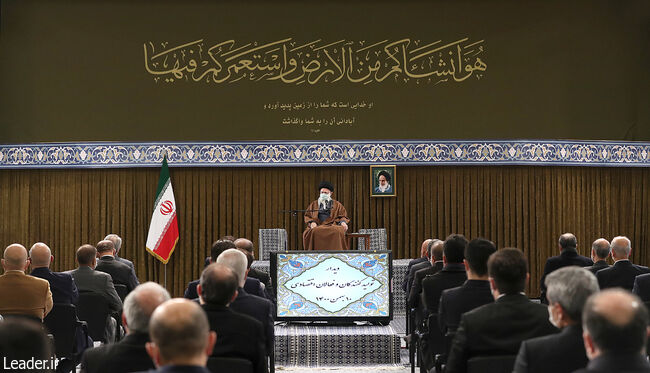 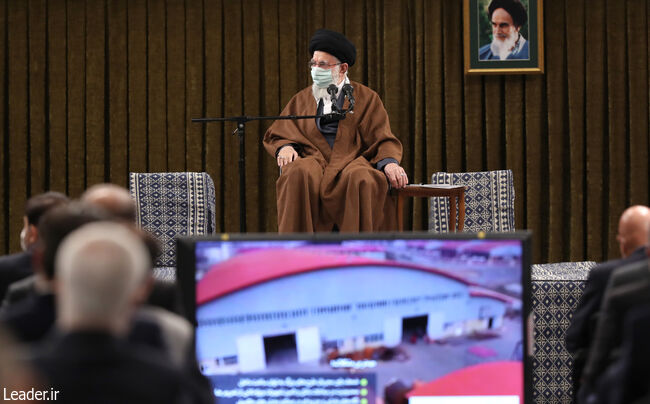 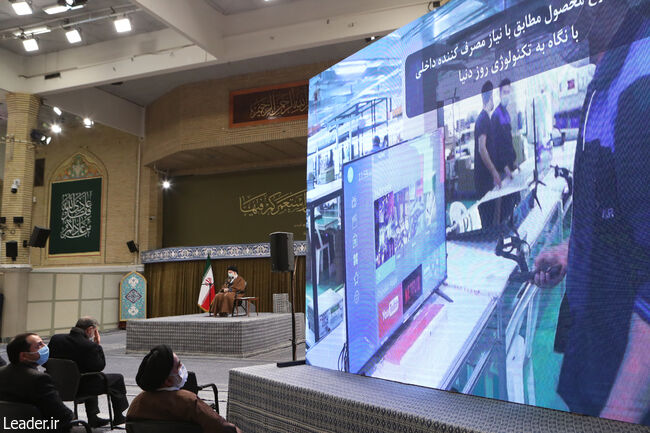 The Supreme Leader of the Islamic Revolution this morning (Sunday) in meeting a group of producers and industrial advocates, called entrepreneurs and economic activists the officers, and workers, the sincere and pure fighters in the economic war with the United States and referring to the clear words of officials of the United States on the humiliating defeat in this heavy battle added: By "creating an Industrial Strategic Plan Document " and "managing, directing, supervising and supporting production", hard-working officials will continue to work to reduce and eliminate faults and "accelerate production, employment and development of the country" with more efforts so that the effects of this process can be observed in the life of people.

Ayatollah Khamenei regarded the attention of government officials to the points made by producers and artisans in today's meeting as a necessity and stressed that informing people about the successes of economic activists in their own words is useful to counter the enemy's psychological warfare; he said: Of course, if the authorities had cooperated more with the producers in these ten years, the damages would have been less, and the successes would have been more incredible. The Supreme Leader of the Revolution called production "jihad" and added: "The resistance of producers against the attack on the economy and the enemy's efforts to prevent the sale of oil and gas, cut off foreign exchange resources and plan to block Iran's foreign exchange, is, in fact, jihad and one of the greatest acts of worship."

Emphasizing that the enemy's plans to conquer the production barrier failed, he noted: "In this invasion of the country's economy, problems were created in the people's livelihood, but production did not fall to its knees, and a US State Department spokesman explicitly stated a few days ago that The policy of maximum pressure led to the humiliating defeat of the United States. The Supreme Leader of the Revolution said: " They saw the imaginary economic collapse of a few months as a pretext for achieving sinister political goals, but after ten years, the fortification of production and the economy of the country is still standing. They are the partner and the main cause of this honour.

Ayatollah Khamenei said: "As it was announced last year, the country's economy needs a jump in production to overcome problems and not be damaged by internal and external momentums, because the jump in production improves economic indicators such as sustainable employment, export prosperity, foreign exchange earnings and lower rates." It pursues inflation and pursues economic independence, which guarantees national dignity and security and increases national self-confidence.

Recalling the words of all domestic and foreign experts about Iran's abundant capacities and vast possibilities, the Supreme Leader said: "If efficient, hard-working and compassionate managers use these capacities correctly, the situation will certainly be many times different."

Ayatollah Khamenei reiterated his constant emphasis on "avoiding conditioning the country's economy and the halt of activities as a result of issues that are out of our hands," adding: "During the same ten years, companies and manufacturers have been waiting for the lifting of sanctions and the results of negotiations." They did not wait, and with work and effort, they became successful examples. He, of course, called the macroeconomic statistics of the 90s really and fairly unsatisfactory, and referring to the effects of such issues on people's lives, said: GDP growth, capital formation in the country, inflation, housing and Supply of machines and similar issues are not at all satisfactory, and the impact on people's livelihoods that we are constantly concerned about is rooted in these issues and realities. The Supreme Leader of the Revolution emphasized: The leading cause of these problems is sanctions and wrong decisions or shortcomings are an essential part of the problems.

Pointing to the importance and maximum use of the advice of experts and professionals, he said all officials, using the views of experts to implement the previously stated recommendations fully, strive to guide, monitor and support production instead of government intervention, improve the business environment and Work, financial discipline, removal of barriers to production, facilitation of licensing of activities, creation of a single licensing window, incentive policies for productive activities, making the production chain knowledge-based, fight against corruption, protection of domestic industries and decisive and brutal fight against trafficking are among these recommendations.

Ayatollah Khamenei, for example, cited the problem of issuing several directives as an example and said: From 1997 to 1400, 1,500 directives were issued only on customs issues. Which one should economic advocates act on? Is there an opportunity for everyone to read them all, at all? He then stressed the need to improve the quality of domestically produced goods and added: "Practical and promotional support for domestic production should lead to improving the quality of products and technology, but unfortunately in some industries, especially in the automotive industry, the issue of quality is not considered, and people have a reasonable objection to them.

The Supreme Leader of the Revolution pointed out: "If prices increase instead of improving quality, despite the atmosphere of support for domestic production, it is a bad thing because the result of all government and banking support and the prevention of foreign competition has practically led to higher prices."

He complained about some domestic manufacturers of home appliances, saying: "Despite the support provided to these manufacturers, it is said that some of their products have increased in price by up to two times, which should not be the case."

"Paying particular attention to making the large industries knowledge-based " was another point mentioned by the Supreme Leader of the Revolution, who said: "In recent years, thousands of small and medium-sized enterprises have been established, but turning the large industries into knowledge-based industries has been neglected in which the ability and knowledge of talented young people should be exploited just as how they were trusted and given tasks, they truly shined in every occasion including the Corona vaccine to the precision-guided missile.

Reiterating that he does not oppose the use of in general," he said. "I believe that efficient domestic knowledge-based companies can meet our needs in large industries such as oil. Therefore, it should not be assumed that the advancement of technology in various industries depends only on the presence of foreign companies.

Ayatollah Khamenei added: " Our talented young people in the field of nanotechnology, stem cells and biotechnology have also done outstanding work and shown that "Iranian youth can".".

The "credit guidance issue" was another point the Supreme Leader of the Revolution pointed out and said: The gap between the growth of liquidity and the growth of GDP is astronomical and unacceptable, and the consumption of credit is such that this mass of liquidity has no effect on production. The government and the central bank, on the other hand, must actively and under strict supervision make the lending of banks conditional on the transfer of credit to production.

He also considered "making agriculture knowledge-based and technologicalising it" necessary and added: "Greenhouse cultivation is significant, but it cannot run the country, and considering the land, soil and water in the country, it is necessary to find an optimal consumption pattern, prevent soil destruction and water loss, and seriously pursue water saving through making agriculture knowledge-based.

Ayatollah Khamenei reiterated the need to prepare and approve the document and the strategic industrial plan of the country, saying: the existence of this essential and legal document will prevent the deviation of the country's industrial plans as a result of shift and change of governments. The Supreme Leader of the Revolution again thanked all those involved in the production and called on the officials to remove the obstacles in this regard, adding: "Government officials are really trying and should continue this effort in such a way that its effects are felt in people's lives after a short time." Before the speech of the Leader of the Islamic Revolution, 14 advocates from different sectors of production expressed their views and opinions.

In this meeting, which was broadcast to their workers through video communication with four production centres, they expressed the following points and axes: