The Supreme Leader of the Islamic Revolution in a group meeting of workers:

The workers are the central pillar of production 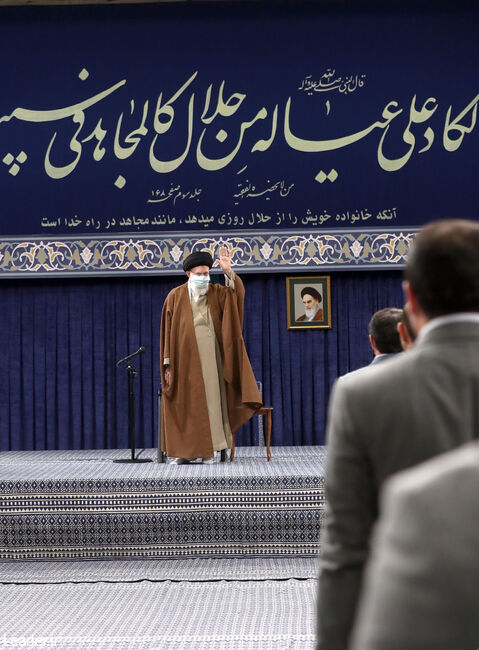 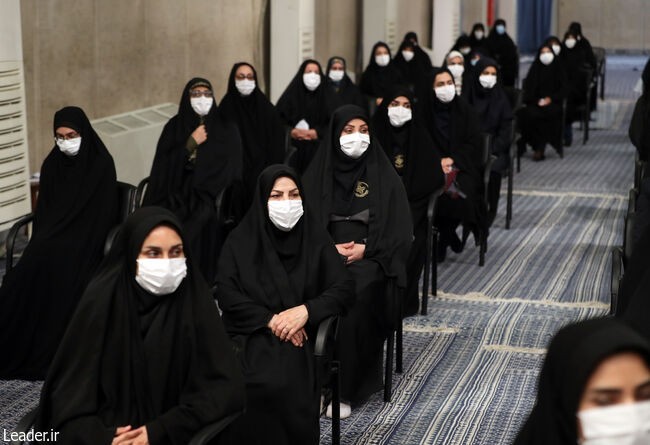 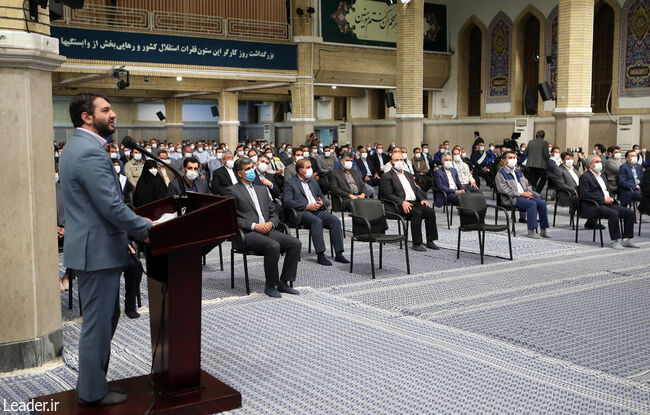 This morning (Monday), in a group meeting with workers, the Supreme Leader of the Islamic Revolution called workers the central pillar of production. He referred to three main issues: "the need to increase job opportunities", "fair regulation of labour-capital relations", and "ensuring job security" and said: that wasteful import is a dagger at the heart of "the national production" and "workers' employment", Therefore, it must be seriously prevented, and while producing quality products at home, people and government agencies should bind to buying domestic products.

Ayatollah Khamenei also referred to the critical plans of the government in the field of economic issues and emphasized: All Branches of Power, departments and people should help the government.

The Leader of the Revolution stated the purpose of meeting the workers to express appreciation and gratitude to them and emphasize the value of work. He referred to Islam's view on the "worker" and the subject matter of "work". He said: Contrary to the exploitative opinion of the capitalist system and the slogan of the collapsed communist system, Islam's view of the worker, is appreciative and value-oriented. This is why the Prophet of Islam (PBUH) kisses the hands of the worker.

Emphasizing the need to create a culture in society about the "value of work", he advised relevant officials to pay attention to the vital issue of skills development in workers.

Referring to the national and brilliant motives of the workers in the military, economic and political fields, the Supreme Leader of the Revolution said: A clear example of the military arena is the dedication of 14,000 working martyrs during the Holy Defence, and if the military issue arises again, the working community will definitely be among the front ranks.

He added about the national motivations of the workers in the economic field: One of the central policies of arrogant powers from the beginning of the victory of the Islamic Revolution was to disable the country's production, which in recent years and the tightening of sanctions, has become reasonably clear.

Ayatollah Khamenei, referring to the workers' provocations that have existed since the beginning of the victory of the revolution, noted: The aim of these provocations was to turn the working class society into a sign and a board showing public protests, but the workers in the political arena also pegged down the provocateurs and have always been by the side of the system and the revolution. He added: "Of course, in cases such as incorrect transfer of factories, the workers' protest was right, however in these cases, the workers defined their borders with the enemies, which is a fundamental issue and we should be deeply grateful for this knowledgeable, insightful and committed committee. Referring to the problems of the working-class community, the Supreme Leader of the Revolution expressed hope that these problems would be gradually resolved with the policies of the new government.

Ayatollah Khamenei listed "increasing job opportunities", "fair regulation of labour-capital relations", and "providing job security" for workers as three primary issues in labour and said: Officials must work to increase job opportunities, and this is possible by investing in the private sector and adequately managing the government in directing capital to the potential capacities and reviving job opportunities.

He stressed: "One of the things that can revive job opportunities and solve the unemployment problem of graduates is the increase of knowledge-based companies. Of course, these companies must be truly knowledge-based, which can increase employment."

"Workers' job security" was the other point the Supreme Leader of the Revolution spoke about: cases such as temporary employment contracts that cause job insecurity must be reformed under a fair law in such a way that both workers are at ease and entrepreneurs are able to maintain discipline in the workplace.

He did not consider job insecurity to be limited to the issue of labour contracts and added: " labour and employment are both affected with any impact to the national production, and this is the reason for the repeated emphasis on strengthening national production."

Ayatollah Khamenei called the smuggling and wasteful import of goods of domestic and quality production a dagger in the heart of the country's production and said: According to experts, every billion dollars of imports of domestically produced goods such as shoes, clothing and home appliances, leads to the closure of 100,000 jobs in the country.

He added in this regard: Of course, car manufacturers should not abuse this word because their situation is not so good, and the intention is those places that have good and quality production.

The Leader of the Revolution considered the preference of foreign products for a domestic product as a strike to the domestic worker in favour of the foreign worker and said: It is on this basis that we ask people to buy domestic products strictly. Of course, the country's biggest buyers are government agencies who should try not to consume any foreign goods.

He further mentioned the proficiency and strength of work and the product's beauty as the duties of workers and entrepreneurs. He said: that the country's education system should be as close as possible to the practical and applied state. In the production sector, the initiative skill and taste used in the products by the worker should increase to such a level that the value of the work and the product go up in the eyes of the customers.

Ayatollah Khamenei again thanked the workers for their resistance to the provocations of the enemies, saying: "The officials and managers related to the working community must fulfil their plans according to the promises made."

At the end of his speech, referring to the government's economic plans, the Supreme Leader of the Revolution emphasized: "The work that the government is doing today in the field of economy is important, and everyone, including various forces and individuals, should help the government achieve these results, God willing.".

At the beginning of the meeting, Mr Abdolmaleki, Minister of Cooperatives, Labor and Social Welfare, presented a report on the action plans of the Ministry in the areas of employment, business facilitation, social security and corporate governance.