The Leader in a meeting with the Imams of Friday prayer across the country mentioned:

Today's battlefield is in soft power, and the enemy is looking for a breach 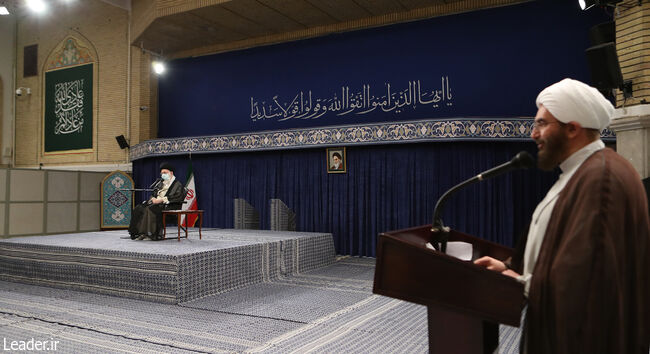 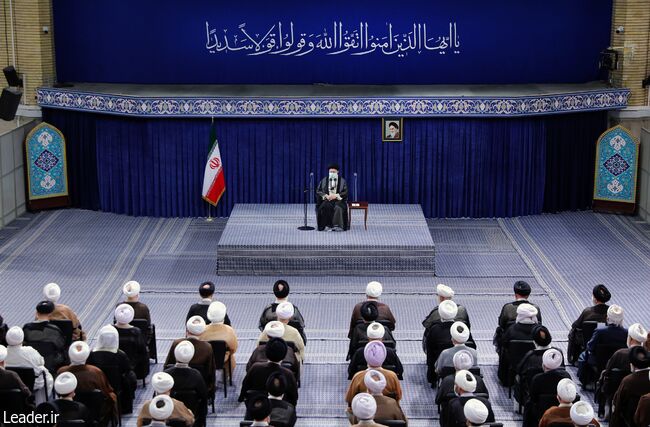 At the beginning of his speech, Ayatollah Khamenei honoured the days belonging to the Ahl al-Bayt (peace be upon them) and expressed the importance of the Friday prayer. He pointed to the exceptional position of Friday prayer among religious duties. He said: "The link between paying attention to God and the presence and gathering of people", "thinking and remembrance of God in a collective way and the descent of His blessings on the group", "Continuance of Friday prayer every week without a stop", "An important base for raising various issues of the society, including Intellectual, social services, public cooperation and preparations and military mobilization" and "combining spirituality with politics" are among the most critical features of the Friday prayer, which has turned it into a considerable capacity and an extraordinary opportunity.

He added: that Friday prayer with such features is an essential link in the complex and long chain of the soft power of the Islamic system. The Leader of the Islamic Revolution then raised the question, "Have we been able to place the Friday prayer in its lofty and worthy position in the Islamic Republic? "He then said: It seems that we have had shortcomings that we must strive to eliminate, and among these, some issues are the responsibility of the Friday Imams, and some are the responsibility of the macro-management of the Friday Imams.

His eminence Ayatollah Khamenei described the character and method of Friday Imams: Just as Friday Imams enjoin piety in their Friday prayer sermons, they should also do their best in learning piety and practising it because otherwise, the result will be the opposite.

He considered "fatherly behaviour towards everyone" as one of the other requirements of Friday Imam behaviour and character and added: There are different classes and tastes in the Friday prayer. The attitude of the Friday Imam should be the same as a father's attitude towards his children, and he should seat everyone at the table of spirituality and religion.

The Leader of the Islamic Revolution referred to the celebration of Ghadir in Tehran and the presence of different groups and appearances. He called this celebration a strange phenomenon and noted: All kinds of people were present at this celebration, and all favoured religion despite their outward differences.

Ayatollah Khamenei added: During one of my trips to a province, I mentioned the presence of various people in the welcoming ceremony to the scholars of that province, and I said among the people, some people were crying whom in the first encounter you may assume they do not even believe in religion while all belief.

In his following advice, his eminence Ayatollah Khamenei advised Friday imams to act like people, that is, to be present among the people and talk to them, and added: Just going among the people is an important thing, so don't distance yourself from them and don't limit your communication to a specific group, of course, during these years, the Friday Imam network has been among the most communal revolutionary institutions.

"Communicating with the youth and preparing a suitable mechanism for it" was the other recommendation of the leader of the revolution.

Referring to the activities of numerous young, spontaneous, anonymous and unassuming groups throughout the country, he called the duty of Friday Imams to link with these groups and support them and said: Participating in social services, such as helping people during natural disasters and in dealing with the Coronavirus, and collecting faithful donations for the needy are among the necessary tasks of Friday Imams, and some of the Friday Imams have fairly shone in this field.

The Leader of the Islamic Revolution emphasized in this context: We are in favour of justice, and we have raised its flag, but the realization of justice without helping the deprived and oppressed class has no meaning.

In another recommendation, Ayatollah Khamenei appreciated the efforts of the Friday prayer bases across the country. He advised the Friday Imams to monitor the health of these bases. He emphasized avoiding involvement in economic activities: economic activity should be avoided even as a means of providing the expenses of Friday prayers because the adverse effects of some respectable gentlemen's entry into these activities still affect the Islamic system.

He called the administration of clerical organizations and seminaries always community-based. He added that the seminaries, the Maraj' and the seminary elites are dependent on people and do not need governments and powers, which is an honour and a privilege. For this reason, seminaries can stand by people in various cases without confronting the governments. Therefore, Friday prayers should be conducted in the manner mentioned above and with the help of people.

The revolution leader expressed some points about the Friday prayer sermons and their content.

He called the Friday prayer sermon and its preacher the spokesman of the Islamic revolution and the explainer and demander of the principles of the revolution. He added: The great art of Friday prayer Imam is to reproduce epistemological and revolutionary concepts such as the significant issue of justice, independence, support of the oppressed and follow of Sharia according to the needs of the day and with new literature.

His eminence Ayatollah Khamenei emphasized that sermons should be rich, instructive and respond to public questions. He said: Sermon literature should be warm, friendly, unifying, promising, enlightening and comforting to the people, rather than causing anxiety, marginalization, mental turmoil, pessimism about the current and future situation, and creating an excuse for the attacks of the enemies.

He considered an essential mission of Friday prayer sermons to counter the constant suspicion spread by ill-wishers and said: Today's battlefield is the field of soft power, and the enemy is looking for a breach in the strong fortress of the people's faith to destroy them because the reason for the victory of the Islamic revolution and the people's resistance in the holy defence and standing against seditions and in any other field has been the faith of the people.

The leader of the revolution called the great work of the Islamic Republic to invalidate the central point of the identity of the western civilization, i.e. "separation of religion from politics", and added: With the slogan of religion, the Islamic Republic not only preserved itself, but with the progress of Iran, it challenged the long-term efforts of the Westerners to make religion and politics incompatible, so the mafia of the Western powers, headed by the Zionists and their capitalists, and America as their showcase, became angry at this brilliant truth. For this reason, they are constantly planning to strike the Islamic Republic. The leader of the revolution further pointed to the issues that have been raised in recent days regarding the issue of women and the hijab and said: These issues have always been raised since the beginning of the victory of the Islamic Revolution, and recently, the same failed attempts are being repeated under the pretext of hijab.

Ayatollah Khamenei added: A few years ago, in a meeting, I was asked what kind of defence do you have against the West regarding the issue of women, to which I said, "I don't see the need for any defence but rather to show offensiveness (to those in West) who have turned women into commodities. They must defend and respond."

He posed the question, "Why have the American and British officials and government media and their mercenaries attacked the issue of women again and again under the pretext of hijab?" And are Westerners really defenders of Iranian women's rights?"He said: Westerners are the ones who, if they could shut off the water to the Iranian nation, they would, just as they have banned the medicine of EB (Epidermolysis bullosa) children and do not allow the medicine to reach them; Are Westerners really sympathetic to Iranian women?

The Leader of the Islamic Revolution pointed out: The truth is that the honourable and talented Iranian woman has stroked one of the biggest and most significant blows to the claims and lies of Western civilization, and they are furious about this.

Ayatollah Khamenei said: that Westerners have been saying for years that until a woman is freed from moral and religious constraints, she cannot progress and reach high scientific, political and social levels. However, in the past forty years, Iranian women have been able to wear the Islamic hijab and the Chador at the same time appear in various scientific, social, sports, political, managerial, economic and cultural fields and achieve great success and pride.

He emphasized: The successes of Iranian Muslim women invalidate the efforts of the Westerners in the past two or three hundred years. For this reason, they are angry with Iranian women, and under the pretext of hijab, they cast doubt and create dilemmas.

Pointing to the issue of hijab in Friday prayer sermons last week and in cyberspace and the media, the leader of the revolution pointed out that these issues should be approached very soberly and logically and away from unnecessary emotions and with clear reasons. The western colonial logic should be exposed and explained.

His eminence Ayatollah Khamenei considered the explanation accompanied by sobriety and mastery to be necessary in other cases as well and added: There may be an anomaly in an area that the Friday imam, considering all considerations, decides to bring up in the Friday prayer, which should be of appropriate quality and in accordance with the position of the Friday imam.

Re-emphasizing the need to deal with the enemy's suspicions and the need to take the duty of clarification jihad seriously, the leader of the revolution said: "Some people resisted the complex war and the blows of the sword, but they fell down on the soft battlefield and against the doubts, the reason for which is, of course, worldly desires.

He also considered the recommendations addressed to the Friday imams to be true for the speeches of the Muharram days. He emphasized the necessity of attracting the audience and trying to improve the gatherings of people in Friday prayers. He added: Contrary to people who claim that people's beliefs are weakening, big ceremonies such as the Ghadir festival, Muharram and Safar mourning, Arbaeen procession and people's financial contributions to seminaries show the strengthening of public faith and religiosity. The inability of an individual to attract people should not be attributed to a community. It should be attributed to the people's irreligion because the people are in the field, and we are the ones who should not withdraw from the field by fulfilling our duties.

At the beginning of this meeting, Hojjatul Islam wal Muslimin Haj Ali Akbari, head of the Policy Council of Friday Imams, reported the approaches, programs and activities aimed at increasing the quality of Friday prayers.