By his complicity in the large crime, the criminal Bush's administration in the last days of his shameful rule more darkened the face of the American regime than ever and added to its dossier of war crimes 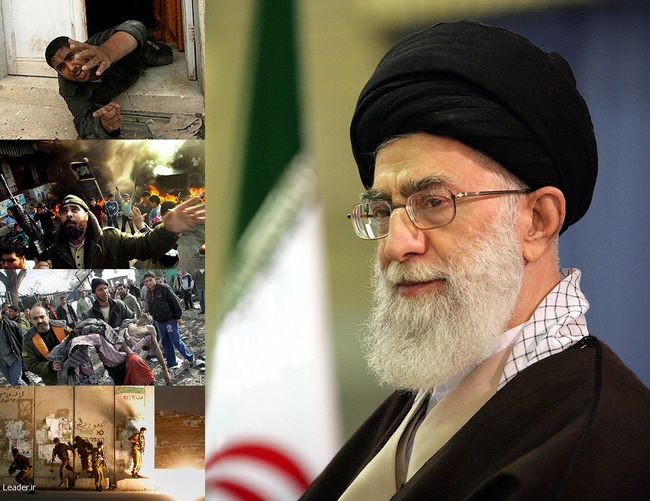 Islamic Revolution Leader Ayatollah Sayyed Ali Khamenei issued a statement Sunday on the horrendous tragedy of Gaza bloodbath in the hand of the Zionists, strongly condemning the heinous complicity of the criminal Bush's regime with the Zionists, adding that the silence of some international bodies and some Arab states provided for the crimes.

Ayatollah Khamenei declared Monday as day of general mourning and called on all Muslim people and free men of the world to render their duty towards the tragic issue. The text of the statement is as follows.

"We belong to Allah, and to Him we return"

The horrific atrocity of the Zionist regime in Gaza in which hundreds of innocent men, women and children were massacred pushed the curtain of deception from the blood thirsty face of the Zionist wolves and noted the negligent about the presence of this warring infidel  in the heart of the lands of Islamic umma.

The horrendous ordeal is very heavy and moving for any Muslim not to say for any free and noble human being in any corner of the world. However, the larger ordeal is the encouraging silence of some Arab governments which claim to be Muslims. Which ordeal could be larger than the fact that Muslim governments, otherwise expected to support the innocent Gaza people against the usurping and hostile regime, adopted a mood which encouraged the criminal Zionist authorities to impertinently consider them as in harmony with the large tragedy?

Which answer the heads of those countries have prepared to give to the Messenger of Allah (S.A.)? Which answer they have prepared to give to their own nations which are indeed mourning the tragedy? Indeed today the heart of the Egyptian, Jordanian and the people of other Islamic countries is overwhelmed with sorrow about the bloodshed as well as the protracted food and medicine embargos.

By his complicity in the large crime, the criminal Bush's administration in the last days of his shameful rule more darkened the face of the American regime than ever and added to its dossier of war crimes. The European governments with their indifference and sometimes their complicity in the large tragedy once more proved that their claims of advocacy for human rights are false and also showed they are present in the front against Islam and Muslims. Now, I ask the scholars and Alims of the Arab world and the chiefs of the Egyptian al-Azhar center "isn't it the time to feel the threat facing Islam and Muslims?" "Isn't it the time to fulfill the mandatory act of standing against any bullying ruler?" Is an additional, more divulging scene of complicity between the warring infidels and the hypocrites of umma in repressing the Muslims than the current Gaza and Palestine developments is needed to prompt you to feel responsibility?

I have also a question to ask the media and the intellectuals of the world of Islam and especially the Arab world. For how long you have decided to remain indifferent regarding your media and intellectual responsibility?

Has there remained any more face for the scandal-hit human rights bodies of the west and the so-called 'security' council of the United Nations to lose?

All the Palestinian Mujahid and other faithful of the world of Islam are supposed to defend the defenseless people of Gaza. Anyone who is killed in the legitimate and holy defense is a martyr and is hoped to be among the ranks of the martyrs of Badr and Ohud battles in the presence of the Messenger of Allah (S.A.).

The Organization of the Islamic Conference must fulfill its historical responsibility in the sensitive conditions and form a solid front, bereft of inaction and reservations, against the Zionist regime. The Zionist regime must be punished by the Muslim governments. The heads of the usurping regime must be tried and punished in person for their crimes and the protracted siege.

The Muslim nations are able to materialize the demands through firm resolve. The duty of politicians, Alims and intellectuals in this juncture is much heavier than others.

I declare Monday a day of general mourning in commemoration of the Gaza tragedy and instruct the country's authorities to fulfill their duties regarding the sad incident.