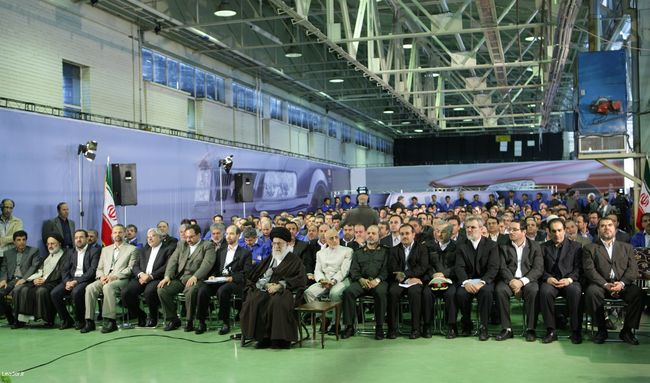 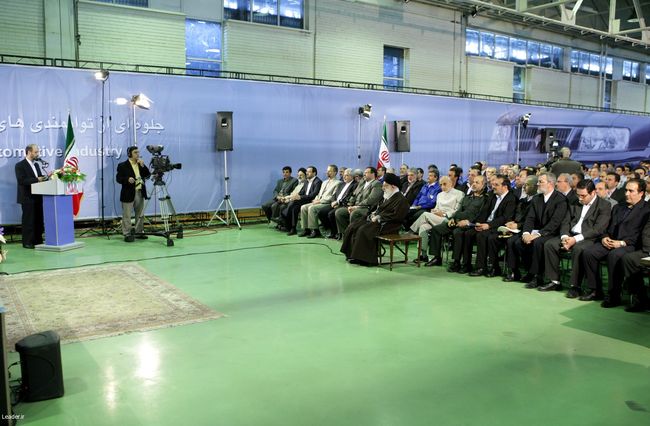 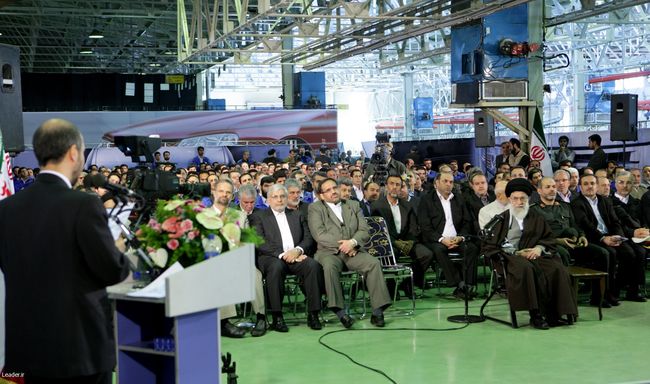 In the three-hour visit, some cabinet ministers as well managers and experts in Iran's automobile industry accompanied Ayatollah Khamenei and elaborated on various sections.

The production line of national petrol engine was part of the visit where the Leader of Islamic Revolution closely observed different stages of its production.

Next, Ayatollah Khamenei visited the production line of national diesel engine where the first domestically-made engine was introduced.

The Iranian-made diesel engine was designed in close cooperation between Iran's car manufacturing industry and universities. Hybrid diesel engine and more powerful engines are among the company's future plans.

Part of the exhibition was allocated to the use of nanotechnology in painting and stain-proof fabrics used in cars' interior and seats.

Later, the Leader of Islamic Revolution addressed the gathering of industry managers and experts, pointing to technological independence as having utmost importance in the country's development.

Ayatollah Khamenei continued that despite valuable industrial achievements, double efforts must be made to raise the quality of products.

The Leader of Islamic Revolution referred to his visit as a symbolic act to emphasize the importance of industry in the country's development.

Ayatollah Khamenei then refuted the idea that a life based on logic and technology does not reconcile with spirituality and ethical values adding that the very existence of the Islamic Republic of Iran rejected the fallacy.

"It's possible to live a logical life facilitated by technology, yet have absolute devotion to moral values and religious rituals," Ayatollah Khamenei said.

The leader of Islamic Revolution spoke of technological achievements as the point of departure for big leaps in all fields of industry relying entirely upon Iranian mind and ingenuity.

Ayatollah Khamenei asserted that a nation with glorious past, talented youth and inspirations demands a flourishing industry in the Muslim world, and the world of Islam would warmly receive that.

Ayatollah Khamenei then reminded some points regarding the country's industry sector especially the car manufacturing industry.

Organizing trade policies in order to prevent irregular imports was one of the important points that he put special emphasis on.

"Abundance and cheapness is good but more important is the growth of local industry, and gates should not be opened to imports according to mainly baseless reasons," IR Leader said.

Expressing his dissatisfaction with policies of car imports and some of the decisions taken in this regard, he stressed: "Generally, the philosophy and logic that is raised for increasing imports is enhancing the quality of local products, but there are also better options to reach this goal, one of which is enforcing policies and regulations for enhancing the quality of local products."

Stressing the necessity of making use of science, knowledge and research in the industry sector, IR Leader said: "The issue of conjunction between industry and universities is very important and a strong relation should be established between these two sectors so that a desired industrial progress can be achieved."

Referring to the importance of industrial exports, Ayatollah Khamenei stressed: "All industrial sectors should produce their products on the basis of export, and different public institutions should provide the export market by doubled and artistic effort."

Pointing to the viewpoint of Islam on environment protection, he regarded respecting environmental standards in industrial products especially automobiles as very important.

"In order to reach industrial progress, one should not become tired of work, endeavor and continued pursuing, because the future of the country and the Iranian people is linked to innovation, intelligence and tireless pursuing of craftsmen and executives of industrial sectors," he stressed.

Ayatollah Khamenei regarded the high Iranian intelligence and talent besides work and tireless pursuing as paving the way for leaping progress, underlining: "Today, Islamic Iran with the endeavor, innovation and self-confidence of the youth is among the few countries that own science and technology in different sectors and this movement should be continued with more haste."

At the beginning of this meeting, the Minister of Industry and Mines Ali-Akbar Mehrabiyan presented a report on the country's industry and mines sector, saying: "In the past 5 years, in addition to the remarkable growth in the production of main industrial products such as steel, aluminum, copper, ironstone, cement and automobiles, Iran's world ranks in these products have also increased."

Referring to the 67-percent growth in industry in the country's whole economic growth, he added: "The whole exports of industrial and mineral products along the fourth development plan have also increased more than 3.5 times."