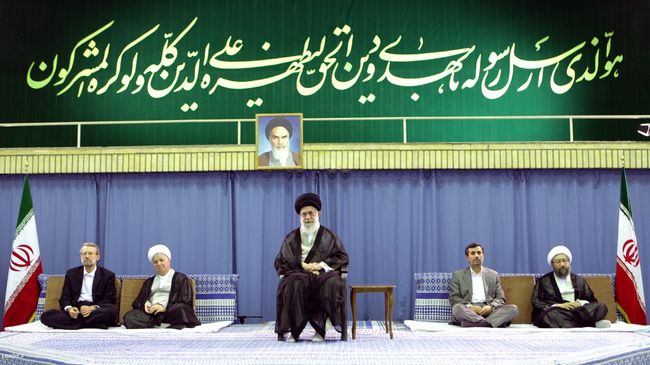 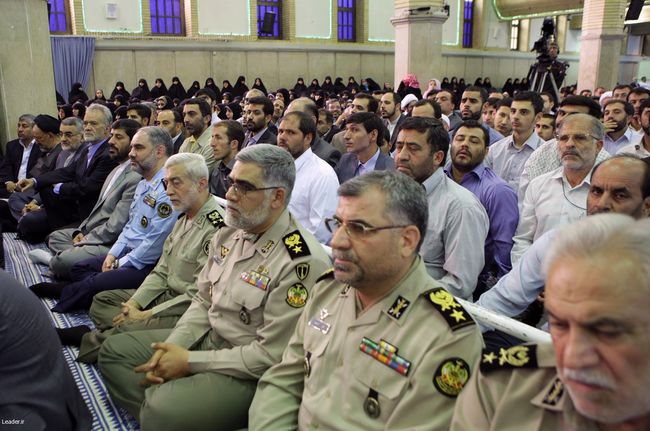 Islamic Revolution Leader Ayatollah Sayyed Ali Khamenei in a meeting with Iranian authorities and a large group of people Thursday congratulated the auspicious Eid of Mab'ath, the appointment of Last Messenger of Allah Hazrat Muhammad (PBUH) to his divine mission, and described the appointment as the greatest blessing of God and the day as the most blessed day of year.
Ayatollah Khamenei said the current Islamic awakening was a movement in the path of the Messenger and that Muslim nations would not allow Americans and Zionists to divert the great movement or ride it through sowing differences.
The IR Leader said the 23-year mission of the Last Messenger left a determining, profound and progressive effect on the history and fate of human being, adding that the Messenger (PBUH) during the short period of his mission founded a society based on faith, rationality, jihad and dignity to which human civilizations are indebted.
Ayatollah Khamenei said the problems of the past and present of the Islamic Ummah were due to Muslims' ingratitude towards the blessing, adding that if Muslim nations enhance their faith in heart and practice, cherish human rationality, pursue jihad in political, military, economic and cultural fields and value their human dignity, they would certainly attain their deserved position.
Ayatollah Khamenei said the current developments in the North Africa and the Middle East showed the Muslim nations have paid attention to the blessing of Islam. "The Islamic awakening in Egypt, Tunisia and other countries show that the oppressive equation the west and their puppet rulers had imposed on the regional nations in the past 150 years has been collapsed and a new era has opened in the history of the regional nations," Ayatollah Khamenei said.
The IR Leader said the future of the regional developments were bright, adding that the arrogant powers were trying to deny the reality and hide the Islamic aspect of the developments. "Americans, Zionists and their followers in the region have been using all their capacities to divert the great movement of the nations and re-impose the previous oppressive equations by bringing to power their puppet elements; However, once a nation is awakened and stands by the field, it could no more be defeated," Ayatollah Khamenei said.
Ayatollah Khamenei urged the world of Islam to keep vigilance against the efforts and complicated plans of the US and the Zionist regime against the nations, adding however that the Islamic awakening would remain in place.
The IR Leader touched on different plots of the enemies of Islam against the Islamic Revolution, including discord, infiltration, assassinations, sectarian and religious differences, and imposition of war against the nation, adding that the Global Arrogance would repeat the plots or similar ones against the awakened Muslim nations.
Ayatollah Khamenei said the Muslim nations can defeat the plots by avoiding argument over trivial issues, avoiding sectarian and religious differences and understanding the significance of the historical movement.
Ayatollah Khamenei underscored Iran's support to any justice-seeking and anti-Arrogance movement, adding that anywhere, a movement takes place against the US and Zionism and any nation which rises up against the US international dictatorship and internal dictators it would enjoy the support of the Iranian nation.
Ayatollah Khamenei then warned that the US, in a complicated plot, tries to create problems for Syria, as a country belonging to line of regional resistance, by simulating the developments of Egypt, Tunisia, Yemen and Libya in the country. The IR Leader said the Syrian incidents were different in nature from other regional developments.
The Islamic Revolution Leader said the nature of regional Islamic awakening was anti-US and anti-Zionist while in Syria, the hand of the US and Zionists was clearly seen. "The logic of the Iranian nation is that anywhere slogans are chanted in favor of the US and Zionists, that is a deviant move," the IR Leader said.
Touching on the innocence of the Bahrain nation, Ayatollah Khamenei said the Bahraini people's movement was similar to the Egyptian, Tunisian and Yemeni movements. Ayatollah Khamenei regretted that some individuals were following the wishes of enemies of Islam instead of heeding the wishes of their nations.