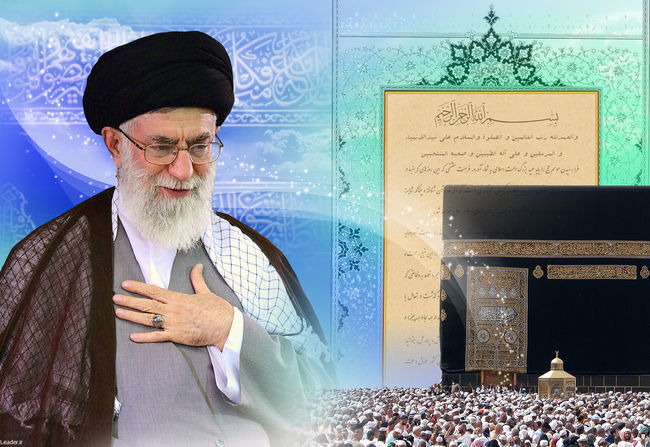 And all praise to Allah, Lord of the worlds, and Allah's greetings upon Muhammad and his pure Household.

Enthusiastic and respectful greetings and peace upon you, blessed ones, who said "labbaik" to the Quranic invitation and hastened to the gathering in God's House.

The first statement is that you should be grateful for this great blessing and with cooperation on the personal, social, spiritual and international level, seek help in your efforts from the Most Merciful and Most Powerful in order to reach the goals of this unparalleled divine command.

In my heart I join with you to plead in unison with you, from the Forgiving and Most Kind Lord, that as He blessed you with this hajj journey, He completes this blessing by permitting you the completion of the hajj and then- with His generous acceptance- returns you to your lands with full hands and complete salvation- insha'Allah.

On this valuable occasion, in addition to spiritual purification and restoration- which is the highest and most fundamental gain of this comprehensive and unique divine command- attention should be paid to the issues of the world of Islam as a central duty and ritual of the hajj participants- with a commanding and expansive view towards the priorities and most important issues related to the Islamic Ummah.

Today in particular, unity among Muslims and untying the knots of separation among some parts of the Islamic Ummah is a priority and important matter. Hajj is the manifestation of unity and harmony and the focal point of brotherhood and mutual help. During hajj, all have to learn the lessons of focusing on commonalities and rejecting differences.

The filthy hands of imperialist politics have, for some time now, placed division on the agenda in order to fulfill their sinister interests, and today with the blessing of Islamic Awakening, Muslim peoples have correctly recognized the enmity of the imperialist and Zionist front and they have taken a stance against them while the policies of division between Muslims have intensified.

The scheming enemy is aiming to stoke the fire of a domestic war among the Muslims, to misdirect the motivation for resistance and jihad and to secure the Zionist regime and the servants of arrogance- who are the real enemies.

Instigating terrorist-takfiri and similar groups in the countries of the region of West Asia is among these abhorrent policies. This is a warning to all of us to count the issue of unity among Muslims as the priority of our national and international duties.

The other important issue is the issue of Palestine. With the passing of 65 years since the establishment of this murderous Zionist regime and the various ups and downs in this important and sensitive issue, and particularly with the bloody events of the past year, two realities have become clear for all.

The first reality is that the Zionist regime and its criminal supporters recognize no limit or boundaries regarding viciousness, cruelty and trampling underfoot all human and ethical standards. Crimes, genocide, mass destruction, the killing of children, women and the shelter-less and any violation and oppression that they can commit, they not only make permissible for themselves, but more so, they take pride in. The tear-inducing scenes of the recent 50-Day War in Gaza are the latest example of the historical crimes which have been repeated numerous times in the last half century.

The second reality is that this disaster and calamity has not led to the results that the leaders and supporters of that murderous regime wanted. Contrary to the idiotic dreams of power and stability for this regime that the filthy officials of the Zionist regime dream, day-by-day this regime has moved closer to implosion and annihilation.

The 50-day resistance of besieged and shelterless people of Gaza in the face of the full capabilities of the Zionist regime, and the resulting incapability and retreat of that regime and its surrender to the conditions of the resistance- is a clear example of that regime's weakness, incapacity and hollowness.

All of this means: the people of Palestine have to be more hopeful than ever before, the fighters of Jihad and Hamas have increase their efforts, purpose and work, the West Bank has to intensify the continual path of glory towards power and steadfastness, the Muslim peoples have to demand real and serious support of Palestine from their governments and Muslim governments have to take sincere steps in this path.

The third priority and important matter is the wise view that activists who wish well for the world of Islam have to take, regarding the difference between pure "Mohammadean Islam" and "American Islam". They have to caution themselves and others from confusing these two with each another. Our magnanimous Imam (ra) was the first to point out the difference between these two and entered it into the political lexicon of the Islamic world.

American Islam is putting the clothes of Islam on servitude to foreigners and enmity with the Islamic Ummah, the Islam that stokes the fire of division among Muslims, instead of trust in divine promises, it trusts in the enemies of God, instead of fighting with the Zionists and arrogance it fights with its Muslim brothers, it unites with arrogant America against its own people or other peoples. It is not Islam, it is a dangerous and deadly hypocrisy which every sincere Muslim has to fight against.

Viewing matters with insight and penetration makes these realities and important issues regarding the world of Islam clear for any truth seeker, and determines- without any doubt- the current duties and obligations. Hajj and its rituals are a valuable opportunity to gain this insight and our hope is that you blessed hajj participants can make complete use of this divine kindness.

I entrust all of you to Almighty God and ask that He accepts your efforts.