In a meeting with the Chinese President 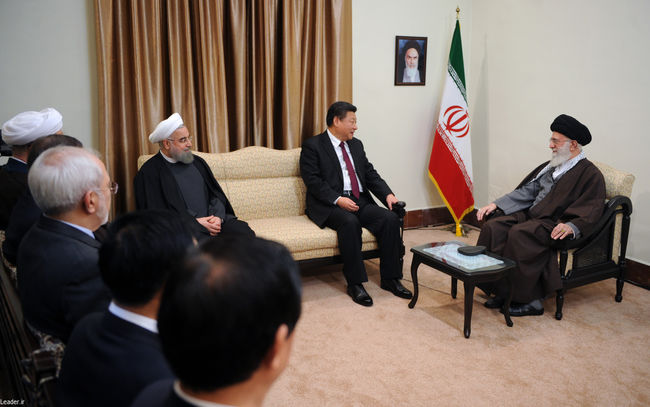 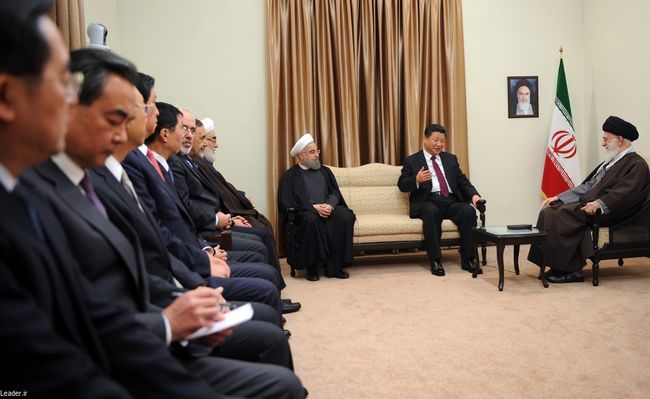 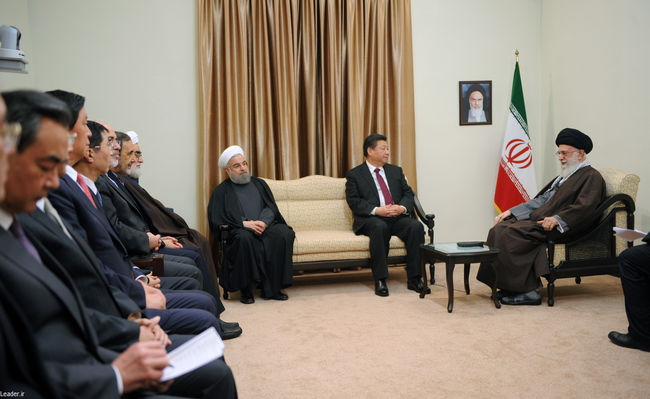 Ayatollah Seyyed Ali Khamenei, the Leader of the Islamic Revolution, in a meeting with Mr. Xi Jinping, the president of the People’s Republic of China, and his accompanying delegation on Saturday afternoon, referred to the ancient history of trade and cultural communications between the two nations of Iran and China, noting: “The government and nation of Iran have always been and [still] are looking for the expansion of relations with independent and reliable countries like China and on this basis, the agreement between the presidents of Iran and China for [promotion of] 25-year strategic relations is totally correct and endowed with wisdom.”

The Leader of the Islamic Revolution referred to the Chinese president’s remarks regarding the necessity of reviving the “Silk Road” and the need for the expansion of cooperation among countries located along this route as a totally logical and acceptable idea, saying: “The Islamic Republic of Iran will never forget about China’s cooperation during the time of sanctions.”

Ayatollah Khamenei then mentioned “energy” as one of the important issues in the contemporary world and pointed out: “Iran is the only independent country in the region that can be trusted upon in the field of energy, because unlike certain countries in the region, Iran’s energy policy is not influenced by any non-Iranian factor.”

Touching upon the hegemonic policies of certain countries, particularly the United States, and their insincere cooperation with other countries, the Leader of the Islamic Revolution said: “This situation has caused independent countries to look for further cooperation with each other and Iran-China agreement for 25-year strategic relations lies within this very framework, [and] the agreements [reached between Iran and China] must definitely be implemented through serious follow-ups by both sides.”

Referring to inclination toward and look to the East in the Iranian culture, the Leader of the Islamic Revolution said: “The Western [governments] have never been able to win the Iranian nation’s trust.”

Ayatollah Khamenei said among Western countries, the US’ policy vis-à-vis Iran is worse and more hostile, adding: “The same hostile policies have caused the Iranian nation and the country’s officials to pursue expansion of relations with independent countries.”

Laying emphasis on the point that supporting the issue of a “united China” is a principled and firm policy of the Islamic Republic of Iran, the Leader of the Islamic Revolution referred to the Chinese president’s remarks about broadening of security cooperation between the two countries and added: “Unfortunately, our region has plunged into insecurity due to the wrong policies of Western [governments] as well as a deviant and erroneous interpretation of Islam, which is prone to spread [and] which must be stopped through rational cooperation.”

The Leader of the Islamic Revolution said certain countries in the region are the birthplace of this deviant thought and noted: “The Western [governments] too, instead of tackling the main source of this [deviant] thought and terrorist groups, are targeting and pressuring Muslims in Europe and America, while these terrorist currents are totally different from the correct Islamic thought.”

Ayatollah Khamenei referred to the insistence shown by the Americans and Western governments on using the title “Islamic State” for certain terrorist groups, saying: “Such an approach amounts to an affront to Muslims and instead of solving the problem will indirectly lay the groundwork for strengthening these groups.”

The Leader of the Islamic Revolution described the Americans’ claim regarding the formation of a “coalition for fighting terrorism” as trickery, noting: “Americans take a similar approach to all issues and they never behave sincerely.”

In conclusion, Ayatollah Khamenei expressed hope that “the results of talks [held] and the agreements [reached] in Tehran would be useful for both sides in the true sense of the word.”

During this meeting, which was also attended by Iranian President Mr. Hassan Rouhani, Mr. Xi Jinping, the president of the People’s Republic of China, expressed satisfaction over his trip to Iran and offered his gratitude for the friendly and sincere sentiments of the government and nation of Iran. Attributing this sincerity to friendly and long-term cooperation and exchanges between the two countries, President Xi said: “Bilateral cooperation between Iran and China must increase on a daily basis based on ‘mutual interests’.”

Referring to the history of contacts between Iran and China through the ancient Silk Road, the Chinese president described this road as the symbol of “peace, progress and friendly exchanges” and added: “The countries located along this route can, through broadening their cooperation, safeguard their own interests in the face of the Americans’ model [which has been designed] to disturb the balance of the regional economy, and achieve their goals.”

Mr. Xi said: “Certain superpowers are seeking to impose monopoly and the jungle policy of ‘either with us or against us’, [on other nations] but the progress of emerging economies has stripped them of the monopoly on power and has [instead] created a proper atmosphere for [the promotion of] the ideas and policies of independent governments.”

The Chinese president mentioned his country’s support for “Iran’s nuclear case” as well as Iran’s support for “integrated and united China” as an instance of mutual trust and independent policies of the two countries, adding: “We follow the road [towards] independent development and are ready, as we stood by Iran during the time of sanctions, to broaden our cooperation [with the Islamic Republic] in all fields after the [recent] lifting of the sanctions.”

Mr. Xi referred to the plethora of “Iran’s geographical, human and energy” advantages, saying: “The economies of Iran and China complement each other and during this trip we have reached an agreement on planning 25-year strategic cooperation, and we are ready to expand and deepen cooperation [with Iran] in cultural, education, technological, military and security sectors at the level of strategic partners.”

The Chinese president also underlined the necessity of working out a mechanism for boosting security cooperation between the two countries in dealing with terrorism and complicated issues of the region.

Mr. Xi Jinping also described Ayatollah Khamenei’s remarks as wise and far-sighted, adding: “The government and nation of China hold a friendly and sincere view towards Your Excellency and we hope that you would contribute to the expansion of relations between the two countries like [you did] in the past.”