Ayatollah Khamenei in meeting with students:

The USA aspires, in vain, to regain domineering status over Iran 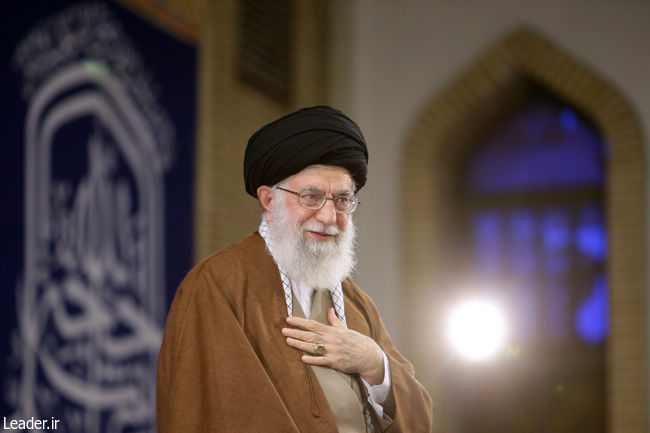 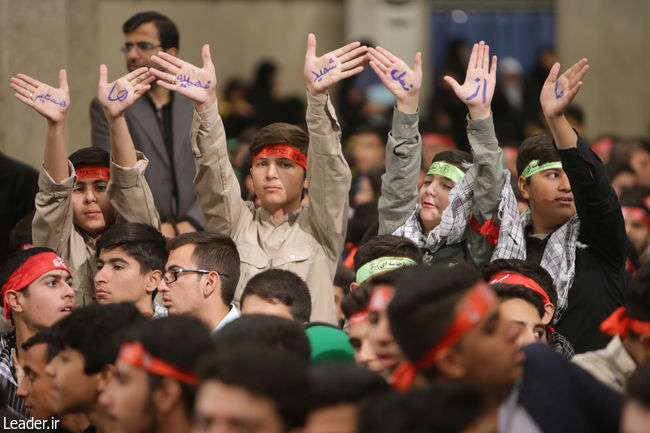 Ahead of the National Day of Fighting Global Arrogance and the National Day of Students, a group of school and university students met with Ayatollah Khamenei— the Leader of the Islamic Revolution— at the Hussayniyeh of Imam Khomeini, on November 3, 2018.

In this meeting, Ayatollah Khamenei pointed out to the continuing challenge between Iran and the U.S. and said: The enemy made every effort against us, with a variety of actions: the U.S. engaged in military, economic, and media warfare against us. Via all these actions, the U.S. aspired, in vain, to regain its previous domineering status over Iran— which it enjoyed during the Pahlavi Regime.
The truth is that, throughout the forty-year challenge, the defeated party has been the U.S., and the victorious party has been the Islamic Republic of Iran. The U.S. is defeated because it has started the attacks without ever achieving the goals it pursued.
At the beginning of his speech, the Leader of the Revolution congratulated all those who had the opportunity to participate in the Arbaeen walk and held: "The West is unable to understand or analyze this extraordinary phenomenon. For some years, they plotted by not covering the phenomenon of Arbaeen; but this year, they had to cover it a little. However, their analysis was vicious, faulty and ridiculous.
He mentioned that the great walk of Arbaeen has perplexed the West and their media, and stated: "Some western media, like the BBC radio, claimed that this great ceremony was held by the government; but which government can make 10 to 15 million people walk for a distance of minimum 80 kilometres?
The leader of the Islamic Revolution reminded his audience: "Even if we imagine that the governments of Iraq and the Islamic Republic of Iran formed this great movement, it is still a miracle. The West would launch a similar movement if they could.
Ayatollah Khamenei stressed: "The unprecedented movement of Arbaeen could never come into existence without love, faith and the revivaling spirit of esteemed martyrs'; no other factor can initiate such a splendid event.
The Leader of the Revolution described U.S. power as declining and asserted: Today, an overview of the situation of the U.S. shows that the U.S.'s power is declining. The U.S. is today much weaker than it was forty years ago.
Ayatollah Khamenei asserted: Many of U.S. politicians believe that the U.S.'s soft power has degraded. It was the same during Obama’s presidency, but it is even more evident today during the current administration. The world opposes every decision the U.S. President makes; not only the people but also the governments oppose him.
He referred to liberal democracy as being exposed and added: Even Liberal Democracy is being exposed and disgraced. The current U.S. president’s measures have made the situation worse for the U.S. and Liberal Democracy, making them lose their remaining grace.
Ayatollah Khamenei asserted that American hard power is also declining by stating: on the other hand, the U.S.'s hard power --that is, its economic and military power-- is also declining. The U.S. military force is largely confused; and as a result, they have turned to companies like Blackwater to advance their military purposes.
The Leader of the Revolution tapped on U.S. economic crisis as another symptom of a decline and held: The same is true about U.S. economy. It suffers from more than 15 trillion dollars public debt and $800 billion budget deficit.
As another indication of U.S.'s defeat, Ayatollah Khamenei asserted: the U.S. failed to infiltrate the independence-seeking spirit among the Iranian youth. Our youth, across the country, have independence-seeking emotions. Some of them are not even very religious, but they are sensitive to the issue of foreign domination.
Indicating that today’s young generation in Iran, if not more exigent than the youth during the revolution, are not less vigorous, he reiterated: “These [independence-seeking] emotions have gradually spread to the youth in other countries, in particular, our neighbouring countries, as well.
Of course, the U.S. regards Iran as responsible for a part of [anti-American sentiments], as neighbouring countries oppose U.S. forces. They blame us for that: Well, you have no right to blame us! The people of Iraq, Syria, Lebanon, Afghanistan and Pakistan hate you [the U.S. government]; are we responsible for it? Why does the U.S. government not understand that nations detest it? They have been exploiting them, as a result, the people hate them.
Ayatollah Khamenei dubbed U.S. sanctions on Iran as futile, further asserting: Through sanctions, the U.S. sought to curb Iran’s economy; however, as a result of the sanctions, a movement towards self-sufficiency expanded in Iran.
The Iranian nation used to import products for many years, but now, they have developed a habit of producing everything.
Ayatollah Khamenei then added: The U.S. is declining. Everyone should know this. Those who incline to compromise are making impractical plans. This decline is not related to today or yesterday; rather it is a long-lasting situation. The U.S. is doomed to degradation and perishment.
The Leader of the Revolution praised Iran’s growth despite enemies’ efforts to halt its progress and said: Contrary to the U.S.'s decline, the Islamic Republic started from scratch and has been advancing during the past 40 years. Today, we witness a serious movement towards political and industrial independence in Iran.
Ayatollah Khamenei then advised the Iranian youth to be watchful in the face of U.S. and added: I have some recommendations for the dear youth:
First, never forget the U.S.'s animosity and do not be deceived by their smile. Sometimes, they say, “we are not opposed to the Iranian nation, but to the Iranian government; they lie.” The government of the Islamic Republic is nothing without the nation. The U.S.'s animosity targeted the Iranian nation even before the revolution, via its agents inside Iran. Second, promote the theory of “Resistance against the fierce enemy.” This theory is practically and theoretically correct.
Third, you, the youth, should regard yourselves responsible for the country’s development. Leave lassitude and fear and regard innovation as your duty. Know that the future of the Islamic Iran will be greatly better than the present time, and Iran will have the upper hand in international events. This is definitely true, and there is no doubt in it. You will see this future firsthand.