In a meeting with President Rouhani and cabinet members 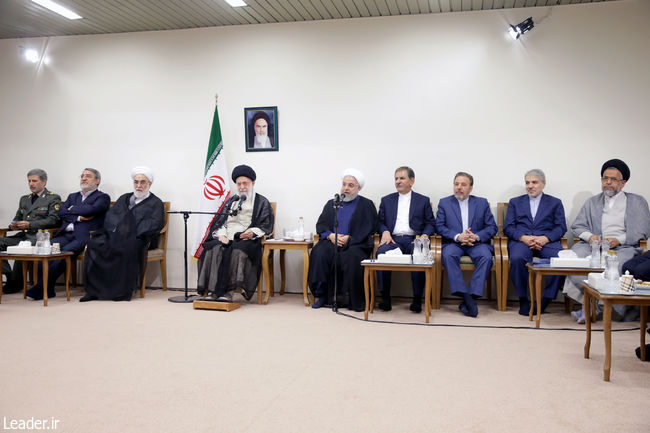 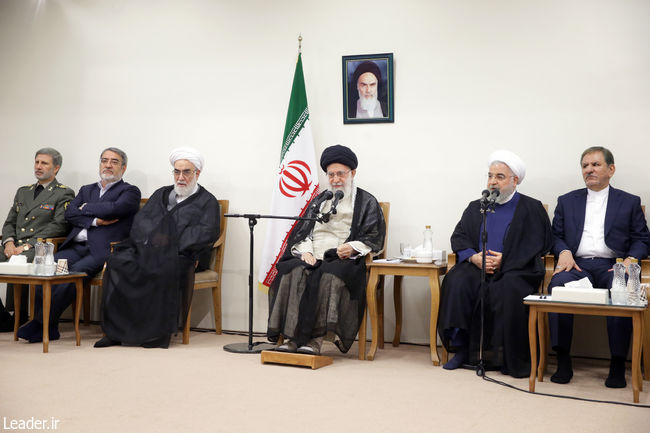 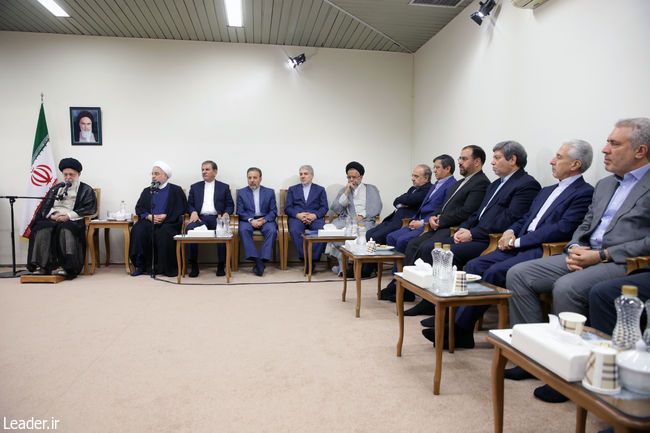 As the martyrdom anniversary of Shahid Raja'i and Shahid Bahonar--which marks the National Week of the Government-- approaches, the President and members of his cabinet met with Ayatollah Khamenei, the Leader of the Islamic Revolution, on August 21, 2019.

During a meeting with the President and the Cabinet this morning (Wednesday) Ayatollah Khamenei, the Leader of the Islamic Revolution referred to the 6 years of the current administration in power and maintained: The remaining two years from the government’s mandate is not a short time; the country’s important issues must be prioritized and priorities must be followed up on without being held back by blights.

Ayatollah Khamenei counted “economy” and “culture” as the two major priorities of the country and stressed that the current problems affect lower and middle classes, the key solution to which is boosting domestic production. His Eminence held: Finding and using this key to unlock economic gridlocks is of course not easy, however, it needs to be attended.

Ayatollah Khamenei argued that the reason for naming the current year as the year of boosting production is to pay attention to the predictions of the increase in sabotage by foreigners and asserted: The best way to counter these animosities is boosting production, and by God’s grace, we can see movements in this regard within various sectors, which is indicative of existing potentials across the country. Hence, officials must place domestic production as the basis of their agenda.

The Supreme Leader then focused on three issues in defining economic priorities: “independence from crude oil export”, “attention to economic motivators that can become powertrains for other sectors”, and “the need for change in officials’ and organizations’ view of producers”.

Ayatollah Khamenei dubbed the formation of initiatives in industrial, agriculture, energy, petrochemical, and household production during the current Persian year as an auspicious event and insisting on the necessity of full reinforcement of these efforts, His Eminence added: This reality shows that those who speak of an impasse in the country are completely mistaken.

Elsewhere in his speech, the Leader regarded “culture” as another priority of the country, and stated: We are facing an all-out assault and a vast foreign front in the field of culture, and every official related with cultural matters must be vigilant.

Ayatollah Khamenei went on to say: The enemies of the Islamic establishment clearly state that overcoming the Islamic Republic and the governance of Islam is not possible through military action and economic sanctions, and this goal needs to be pursued through cultural intrusion, influencing minds and provoking lusts.

Pointing out the organized anti-cultural and anti-value activities by enemies, Imam Khamenei noted: Infiltration of cultural products such as arts, cinema, books, and theatre by means of systematic activities must be prevented.

Ayatollah Khamenei reminded his audience that expressing concerns regarding the issue of Hijab in the society is correct, and to the point, and remarked: Hijab is a religious law, and a legal issue and government entities and officials must make sure before everyone else that the law is upheld in this matter.

“Not fearing the enemy” was another piece of advice given by Ayatollah Khamenei to government officials. His Eminence said: Sometimes I hear words that exude fear of the enemy, where in reality the enemy must not be feared. Because this enemy has existed since the beginning of the revolution and has done everything in its power, without being able to achieve any goal.

In another part of his speech, he talked about the situation in Kashmir, expressing utmost concern about the condition of Muslims in this region and asserted: we have good relations with the government of India. But we expect the government of India to adopt a just policy towards the noble people of Kashmir, and to refrain from oppressing and bullying the Muslim people of this region.

The Leader of the Revolution described the current situation in Kashmir and the related Indo-Pakistani conflict, a result of the actions taken by the evil British government when leaving Indian subcontinent and said: The British left this open wound in this region on purpose to make the conflict in Kashmir drag on.