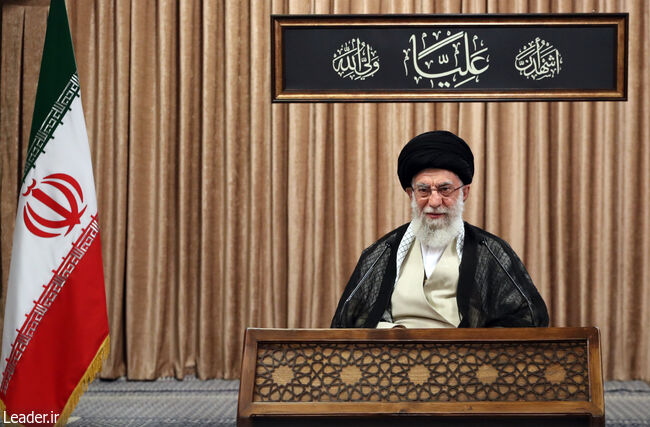 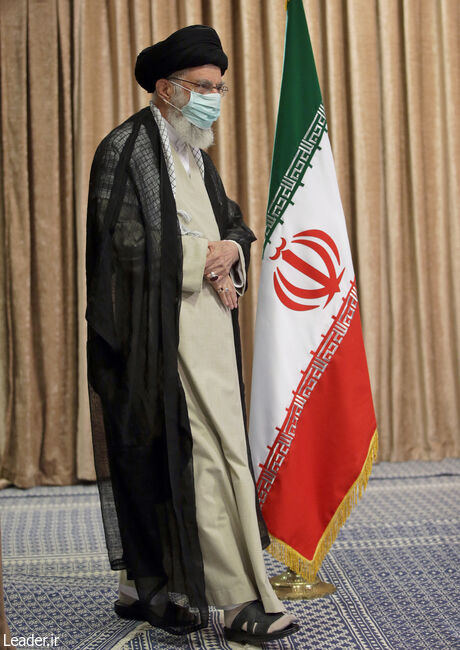 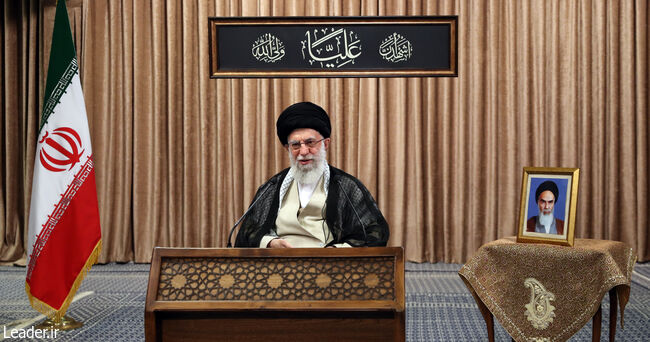 In the Name of God, the All-Beneficent, the All-Merciful

Supreme Leader of the Islamic Revolution, "The Quds Force is the Greatest and most Effective Factor in Preventing Reactionary Diplomacy in West Asia".

The Supreme Leader of the Islamic Revolution in a live televised program addressed the great nation of Iran this afternoon (Sunday). He cited the critical position of teachers and workers in developing the country. He said, "indeed, the elections are a vital opportunity for Iran and an irreplaceable factor in strengthening the foundations of the system". The Leader also criticized the efforts made to discourage the people towards the elections and emphasized this by saying, "candidates should stay away from making false and unsubstantiated promises to people and present their actual plans to the public".

He also expressed his regret and astonishment about the wrong statements of some officials regarding foreign policy. He stressed this by saying that "the Quds Force is the greatest and most effective factor in preventing reactionary diplomacy in West Asia and one should not speak in ways that would echo the words of foreign (powers)'.

At the beginning of his speech, the Leader said that the blessed Nights of Ordainment (layal al-qadr) are at the apex of the Holy Month of Ramadan and suggested that everyone should take advantage of the tremendous potential inherent in them. He said, "Supplication, invocation, repentance and tears are examples of this very blessed banquet of Ramadan, so we must be vigilant and seek intercession as much as possible to connect with the Gracious Lord and prepare ourselves for these valuable blessings".

The Leader of the Islamic Revolution took a brief look at the character of Imam Ali ibn-Abi-Talib (a.s.), taking into account the very high and sublime status of Imamate. He added, "The meaning of Imamate is not merely the head of a religion or the world, rather Imamate has a very lofty meaning which is impossible to comprehend except for those who are the Infallibles (ma'sumeen) and the selected few".

The Leader, in reference to the devotion of the Shias, non-Shia Muslims, and the followers of other religions towards Imam Ali (a.s.) added, "This love and dedication is because of the remarkable feature of the Commander of the Believers (Ali) which is his extraordinary, scrupulous, far-reaching and unreserved justice which is his most prominent characteristic.

He mentioned his asceticism, his total indifference to the world, his bravery, his kindness and compassion towards the weak, his resolve against oppressors and tyrants, his dedication in the way of truth, his profound wisdom in speech, his steadfastness in conduct and other attributes that stand out as the apex of his perfection.

The Leader of the Islamic Revolution said that conforming to the personal characteristics of Imam Ali (a.s.) and his way of governance is a weighty responsibility and added, "We are very behind in these areas".

Grand Ayatollah Khamenei mentioned Imam Ali's unparalleled enthusiasm for martyrdom. He said, 'We are thankful to Allah that during our time there were and still are devoted men, who, in following their Master, are in love with martyrdom and Haj Qasem Soleimani was a great personality in this area'.

He explained the position and essential status of teaching and gave an example of Martyr Mutahhari. He said that 'Martyr Mutahhari was a religious scholar, philosopher, thinker, jurist and a great intellectual; however, the most crucial feature of this martyr was writing profound and precise works in a continuous soft war struggle. In this struggle, he showed concern for his community by standing against the waves of deviant thoughts from the East and West.

The Leader of the Islamic Revolution mentioned that prioritizing duties and responsibilities were two of the attributes of Martyr Mutahhari. He said, "By prioritizing the needs of the society, he extended the capabilities of scholarship and science to greater relevance to fulfilling its requirements. Teachers must therefore set these attributes and methods as their examples '.

His Eminence regarded safeguarding the thinking of students of both school and university to be one of the most critical responsibilities of the teacher. He said, "Teachers must use their integrity, capability and skills, to transfer the scientific knowledge of humankind to the teenagers and younger generation and they must raise their students to be people of thought and contemplation'.

He considered teachers as military officers in the army of the country's progress. He added, "Teachers must believe in this great position; they must be sensitive to this responsibility and act upon their historical duty".

The Leader of the Islamic Revolution cited foreign cultural invasions and corrupt ideas on the youth. He said, "In addition to using the great potential of the educational system, teachers must attempt to diffuse these attacks through sacrifice so that casualties will come close to zero and progress is made on the highest level'.

The Leader of the Islamic Revolution reiterated the high rank and the profound effect of teachers. He said, "Understanding this high and influential position should become part of a public culture where the media and the educational system have a great part to play in this area'.

His Eminence mentioned the importance of solving the financial disadvantages of teachers by indicating that it was the responsibility of the Government's executive branch and Parliament in this regard, and warmly thanked the tireless efforts of teachers in continuing to teach during the covid-19 pandemic and the cooperation of the families especially the mothers.

About the National Labour Day, the Leader focused on the status and rank of workers and comprehensive support for this hard-working sector. He also cited the effect and role of workers in advancing the economy and independence of the country.

His Eminence mentioned the lofty position of labourers in Islam. He gave the example of the Holy Prophet (s) when he kissed the hands of a labourer. He said, "In an independent and production-centred economy, the worker is the main pillar. This significant role of the worker should become a public culture through the mass media".

He stated, 'From the beginning of the Islamic Revolution, the nefarious foreign enemy has attempted to put the workers against the Government, but the workers firmly resisted as we witnessed during the eight years of Iraq's invasion of our country.

His Eminence said that supporting workers does not only mean raising the minimum wage to be on par with fluctuations in the current market. It also means "Increasing worker skill level and professionalism, paying attention to their insurance and medical needs, work safety, housing plans and establishing fair relations between workers, entrepreneurs and the Government".

He mentioned that appropriate planning to create job opportunities should be implemented in detail. Furthermore, the aptitude of the private sector could be a great asset in supporting the country's economy and creating job opportunities. He added, 'Creating jobs is not only an economic advantage, but it also has social and political benefits. It is an underlying basis for activity, mobility and vitality and will prevent many social and security evils, especially among youth. Creating job opportunities is one of the most expected duties of every Government.

In an admonitory tone, regarding the multi-dimensional importance of creating job opportunities, Ayatollah Khamenei mentioned that those who deliberately shut down manufacturing units to use the land and resources for their own interests should be aware that they are committing unethical and sinful acts. Furthermore, this act is a betrayal of the nation, workers, and the country's independence and economy by damaging national production.

The Leader advised the country's authorities, particularly the two ministries of Industry, Mining and Trade and the Ministry of Agriculture-Jihad, to strictly confront these cases with reprimands.

His Eminence Grand Ayatollah Khamenei reiterated the view of economists on the importance of the activity of small and medium-sized manufacturing units. He said, 'the expansion of these workshops is the basis for creating job opportunities and providing wealth for the society especially for the less fortunate.

He further mentioned, 'The most convenient way to thwart sanctions is to endeavour in a non-symbolic manner to nurture national production truly; consequently, this will lead the enemy to lose hope in further pursuing their sanctions subsequently making the ineffective.

In another part of his speech, the Supreme Leader mentioned that the elections are a vital and distinctive opportunity to strengthen the foundations of legitimacy and security across the nation. He added, 'Some people attempt to question the elections and create doubts in the functioning of the Guardian Council or other relevant organizations, which makes people indifferent towards the elections,  and this is wrong.

The Supreme Leader went on to say, "Of course there are some people who only accept the elections when they win. But when they do not like the outcome, they accuse the election committee, or as they had previously done in 2009, they will riot. These accusations are unfair, and rioting is a crime.

He gave an essential piece of advice to the candidates, saying, 'These individuals should not say or make any unsubstantiated and deceptive claims or without taking the resources available into consideration. This is something that they must refrain from'.

The Leader further emphasized that people who stand for elections must present realistic programmes that experts can confirm.

The Leader also said that sometimes certain people might say things as if they are against the Constitution. However, when someone wants to participate in the elections, they must believe in Islam, the Constitution, and votes. Therefore we demand that someone should take this into account.

The Leader expressed his disappointment and surprise at recent statements by the country's officials, saying that they were reminiscent of the words of the nation's enemies and of the U.S.A. He said, 'the U.S.A. has been angry with Iran and its allies for years because of Iran's influence in the region. He meant by this the Quds Force and Martyr Soleimani, which is the main reason why they martyred him '.

The Supreme Leader said, 'The country's policies consist of various cultural, economic, social, educational and foreign policy plans. They should all go forward, and stopping any of them is a big mistake that government officials should not make.
He emphasized that Quds Force is the most significant and most influential factor in preventing reactionary diplomacy in West Asia. It has become the base for implementing the policies of the Islamic Republic'.

Ayatollah Khamenei pointed out the desire of western superpowers to bring back the domination of Iran they had during the time of the Shah. He said, 'It is for this reason that they do not allow us any diplomatic engagement and oppose us expanding relations between Iran, China, Russia and neighbouring countries. They have even discouraged officials from neighbouring countries from travelling to Iran, and we must act independently with diligence and power to oppose these pressures'.

The Leader emphasized that the Supreme National Security Council, and not the Foreign Ministry, decides global foreign policy. He said, 'The Foreign Ministry does have a say in the decisions made, but it is not a decision-maker and is only a policy executer'.

He said, 'In our country, the Supreme National Security Council drafts foreign policy in the presence of officials, and the Foreign Ministry, through its protocols, implements the Council's policies.

His Eminence Grand Ayatollah Khamenei ended by wishing Divine success for officials that intend to serve the homeland. He said, 'Do not speak in such a way that it can be interpreted as disapproval of the country's politics and make enemies happy with what you have said.