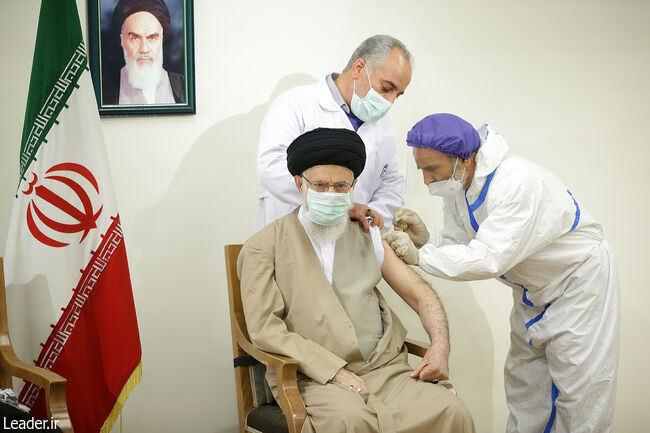 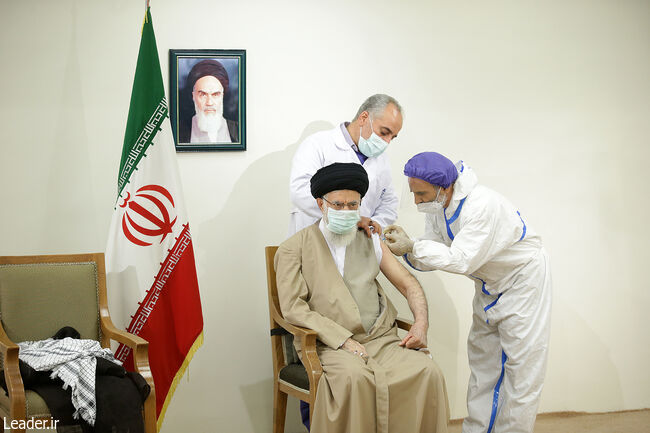 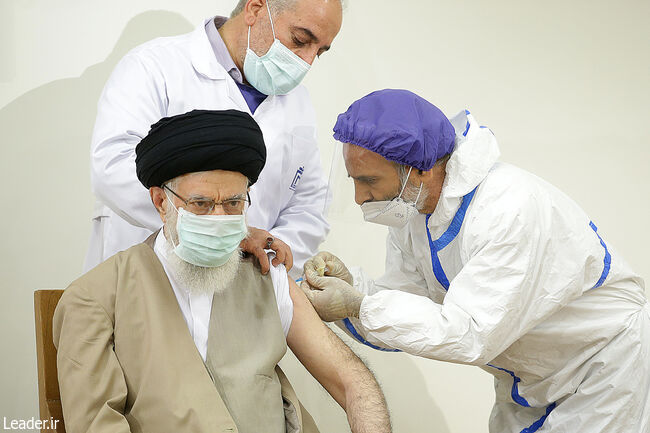 This morning of Friday, 25th  June, Ayatollah Khamenei received the first dose of the Iran Covo- Barekat vaccine. The vaccine, which results from the efforts of young Iranian researchers and scientists, recently received a license through relying on indigenous knowledge, and Iran became one of the six countries producing the corona vaccine in the world. After injecting the vaccine, the Supreme Leader of the Islamic Revolution thanked all those involved in bringing national honour with their honourable work through their knowledge, experience, scientific and practical efforts, and said: I would like to express my sincere gratitude towards Mr Mokhber and his colleagues, who shined in this case as well as other subjects with compassion, interest, initiative and ability, and Dr Marandi and Dr Sajjadi for their constant care of my health.

By referring to the insistence on his vaccination since a few months ago, Ayatollah Khamenei said: "Since the beginning, I did not want to use a non-Iranian vaccine, so I said I would wait for the Iranian vaccine because we must respect this national honour and when the possibility to prevent and treat inside exists why not use it? He added: "Of course, when needed, the use of foreign vaccines along with Iranian vaccines is not a problem, but we must respect all the young, hardworking and active Iranian scientists and thanks to those active in the production of this vaccine and other centres that are producing vaccines in the country."

The Supreme Leader of the Islamic Revolution said: "In addition to insisting on using the Iranian vaccine, I emphasized that the vaccine should be received in its natural turn. Today, thank God, people over 80 years of age and my peers have received the vaccine." He also stressed the need to register scientific documents and publish articles related to vaccines and added: in addition to the robust, fast and timely production of vaccines, prepare and publish the scientific papers and essays for the world to know about your great work.

Dr Namaki, Minister of Health and Medical Education, thanked the Supreme Leader for his support, pointed to the excellent management of the fourth wave in the country compared to other countries and the registration of the Iranian treatment model and said: from the beginning, reasonable technical measures were taken from the beginning regarding the vaccine and transfer of technical knowledge and the executive staff of Imam Khomeini's order committee, in addition to vaccines, provided excellent cooperation in providing masks and oxygen generators. "After we issued the vaccine permit, the US President announced that it was possible to transfer the vaccine to Iran, which showed that their previous statements were false," said Dr Namaki, referring to the Americans' disgrace in claiming no restrictions on the transfer of equipment and medicine to Iran.

The Minister of Health said: "By the end of August, vulnerable groups, incurable patients and people over 60 years of age will receive the vaccine, after which students and school officials will be injected." Dr Namaki also informed about the activity of a particular group to record the scientific documents of various vaccines produced in the country and present these documents to international organizations. Dr Namaki also said about the necessary precautions after the vaccine injection: the mask should still be used because the vaccine reduces the risk of serious illness, but there is still the possibility of infection.

Also, Mr Mokhber, Chief Executive Officer of Imam Khomeini (r.a) order committee, regarded the injection of Iranian vaccine to the Supreme Leader of the Islamic Revolution as a unique event and a practical reflection of the inner self-confidence and reliance on the youth and efforts of more than 200 young professionals under the age of 30. Referring to the efforts of researchers from knowledge-based companies in mass production of ventilators and drugs such as Remdesivir, Mr Mokhber said: "By the end of September, most of the vaccination need of country will be met."