Be the manifestation of national consent 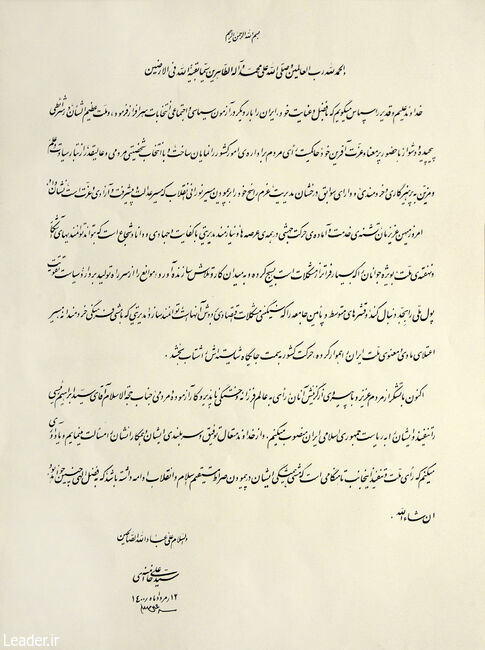 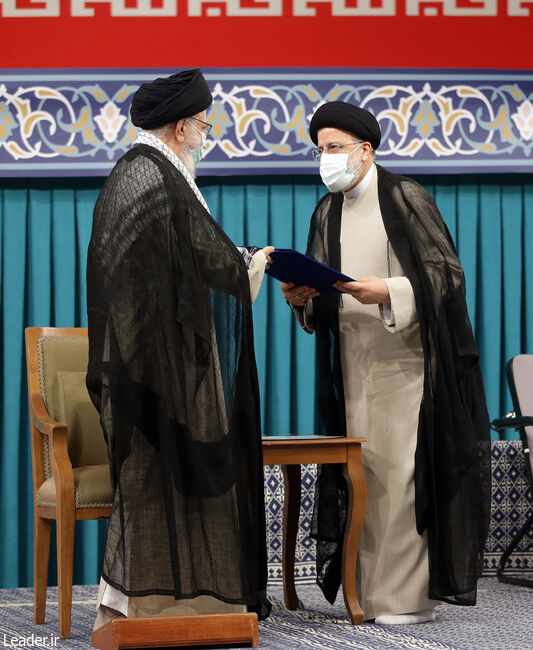 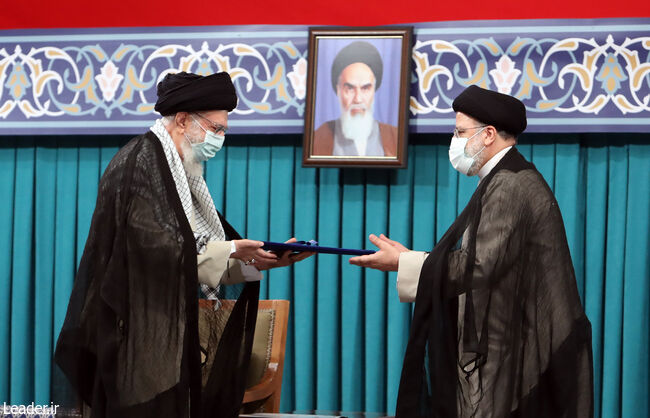 The presidential inauguration ceremony of the 13th term was held today morning (03 August 2021) at the Hosseiniyeh of Imam Khomeini. By recognising the people's vote, the Supreme Leader of the Islamic Revolution has appointed Hujjat al-Islam Seyyed Ebrahim Raeisi as the President of the Islamic Republic of Iran.

In the decree of endorsement, Ayatollah Khamenei considered the meaningful and honourable presence of the people in the elections. He added: Electing a popular, pious and brilliant figure of management is a sign of the nation's determination to follow the enlightened path of the revolution, the direction of justice, progress and freedom. To leap forward in all areas, the country's people have emphasised removing barriers to production, strengthening the national currency, empowering the middle and lower class of the society and expeditious move towards the worthy position of the country.

In the name of Allah The Most Beneficent The Merciful

All praise is to be for Allah, the Lord of the worlds, and blessings of Allah upon Muhammad and his pure family, Specially the last Allah's authority on His earth.

I thank the Almighty God, who made Iran proud once again in the political and social test of the elections with His grace and care. In these current difficult circumstances, the great Iranian nation has demonstrated the role of the Public vote by its meaningful and honourable presence. People showed their firm determination to continue the enlightened path of the revolution, which is the path of justice, progress and freedom, by electing a popular and esteemed personality from the lineage of sovereignty and knowledge, adorned with piety and wisdom, and with brilliant records of management.

Today, our beloved homeland needs to be served; it is ready to leap forward in all areas and requires competent, hardworking, wise and brave management that can mobilise the overt and latent capabilities of the nation, especially the youth, should be encouraged to be on the field. The new administration should put the constructive efforts, remove barriers to production, pursue the policy of strengthening the national currency, and empower the middle and lower classes of society, which are burdened by economic problems. Management that, with a wise cultural policy, has to pave the way for the material and spiritual upliftment of the Iranian nation should accelerate the country's movement towards its worthy position.

Now, thanks to the dear people, following their votes, I endorse the Elected president Mr Hujjat al-Islam Seyyed Ebrahim Raeisi, as the President of the Islamic Republic of Iran, who is a wise, tireless, experienced and popular personality. I ask God Almighty for his success and pride, and for his colleagues and remind them that the vote of the nation and my endorsement is valid as long as they continue to follow the straight path of Islam and the revolution, which, by the grace of God, will be so, Insha'Allah.

And peace be upon the righteous servants of God

In a speech at the inauguration ceremony, the Supreme Leader of the Islamic Revolution asked God Almighty to bless this hopeful day for the people and the country, calling the nation's presence in the presidential election completely meaningful and a symbol of religious democracy. The Twelfth Government also wished success and special divine care to Mr Raisi and his colleagues in the new government.

He described the inauguration ceremony as based on the constitution and the tradition established by Imam Khomeini (RA). He added: "This ceremony is a manifestation of the significant issue of" rational, calm and firm transfer "in the executive branch and in fact in the management of the country."

The Supreme Leader of the Revolution called the existence of political diversity one of the most important themes of the endorsement ceremony and added: "Different political tendencies of governments show political diversity in the country, and this fact is a sign of freedom and authentication of elections."

Referring to the holding of elections with rightfulness and security, he sincerely thanked all the relevant bodies conducting the elections and providing order and safety, especially the dear Iranian nation. He added: there was a conspiracy of boycotting the election directed by the outsider enemies while some people from inside followed the same line out of negligence and some people may be followed them purposefully, but the nation responded decisively and, by understanding the situation, had a good turnout in the elections.

Ayatollah Khamenei called the changes in the executive administration as a matter of hope and said: "The presence of new people with new wills and new initiatives creates hope for everyone, especially the youth, which has to be appreciated."

He added: "This shift is also an opportunity for those who have thoughts and opinions to find the mistakes of the past with care, reflection, and offer solutions."

The Supreme Leader of the Islamic Revolution, referring to the reliance on the values ​​of the revolution in Mr Raisi's election campaign, emphasised: This right path must continue because it brings the nation to its fundamental rights and lifts Iran to its worthy position.

Furthermore, he said: "The values ​​of the revolution are not imaginary concepts but have been clearly and repeatedly stated in the words of the great Imam (Khomeini), and these words should be the criterion and followed."

The Supreme Leader of the Revolution considered the nation's stepping into various issues as the primary key to solving problems. He added: "Pursuing the values ​​of the revolution increases the motivation of the people and their act in different fields, is a valuable and effective one, which is irreplaceable and has no alternative for it."

Ayatollah Khamenei called the transformation of people from a passive and scattered group into a united, motivated, purposeful and idealistic nation as the central masterpiece of the revolution and the Imam (Khomeini). Then he said: "Any factor and element that can increase the unity, motivation and hope of the nation and brings people closer to each other, must be appreciated as the values ​​of the revolution contain this type of determinative factor.

Ayatollah Khamenei pointed out: Of course, being among the people should not cause them to neglect the nation's elites, as paying particular attention to the elites is necessary and valuable.

Emphasising that the government should be the manifestation of the national consent and a compassionate attitude towards the people, the revolution's leader added: "One of the important things that help the government be popular is the commitment to have an honest dialogue with the people without political affiliation." It is necessary to speak honestly with the people, state the problems and solutions, express the expectations, and provide the required assistance to the people.

Ayatollah Khamenei's following advice to the 13th government was to recognise the country's great potentialities and pay serious attention to them.

He said: "These days, it is said that the country's problems and shortcomings are many, While the country's capacities in the fields of water, oil, mines, having a large domestic market, neighbours and the amazing talents and readiness of the youth are far beyond the problems and extraordinary."

The Leader of the Revolution pointed out: "There is no doubt, with these capacities, we can solve the  problems, as long as they are well known and then used with tireless efforts around the clock."

He cited tax evasion, unwarranted monopolies, unhealthy commercial activities, and preferred currency misuse as examples of corruption that must be tackled with planning and following-up.

Ayatollah Khamenei said that solving economic problems requires a plan and moving according to the general plan. He said: "Problems cannot be solved with daily work and unforeseen actions, while everyone knows that solving economic problems is time-consuming and officials must make every effort." By this time, the plan should be as short as possible.

He called the forming of the government at its earliest time as necessary action and added: the country's conditions do not allow you to delay the formation of the government. So the esteemed President should hurry in introducing the proposed ministers, and the Islamic parliament must act in reviewing the qualifications of the ministers as soon as possible.

The final point mentioned by the Supreme Leader of the Revolution was the issue of a propaganda war.

Ayatollah Khamenei, referring to the enemies efforts to influence and dominate the public opinion of countries, including the Iranian people, through soft war and propaganda and media war, said: If the general opinion of a nation is given to the hands of foreigners, then the country will move according to their will.

The Supreme Leader of the Revolution pointed out the weakness and inefficiency in the media and propaganda work inside the country and noted: we should act more robust and more innovative in these issues.

In this ceremony, Hujjat al-Islam Raisi, the President of the Islamic Republic of Iran, thanked all the people and his supporters and said: "In the last elections, the nation, despite all the financial and health problems, disappointed its enemies and gave hope to its friends."

Mr Raisi, by mentioning the messages understood by the last successful elections; as the demand for change, justice, the fight against poverty, corruption, discrimination and rent-seeking, the protection of the values ​​of the revolution, the need to solve problems and, in a word, change the current situation to the best one, He said:  the existing issues such as debt, budget deficits, unemployment, shortage of houses caused by hostilities, as well as some internal inefficiencies, need to be rectified, and people expect their damaged trust to be restored.

Emphasising that we had problems wherever the leadership's instructions were ignored, the President said: "We will seek to lift the sanctions, but we will not tie the people's need to the will of foreigners."

Mr Raisi said: "The budget deficit, capital market stability, inflation control, the pandemic, the issue of water and electricity are among the important issues that need to be addressed urgently". He said: The government has prepared a short term plan to solve ten urgent issues.

The President added: The four-year transformation plan, which will soon be made available to experts, will pave the way for the implementation of the seventh development plan."

In this ceremony, the Interior Minister also reported on the 13th presidential election.

Mr Rahmani Fazli, "Rule of law, fidelity, impartiality, complete security, healthy competition, maximum participation and maintaining the rights of executives, candidates and voters" in order to increase political enthusiasm and public participation are among the principles of holding elections and said: The Guardian Council has declared the elections legal without invalidating even one ballot box.