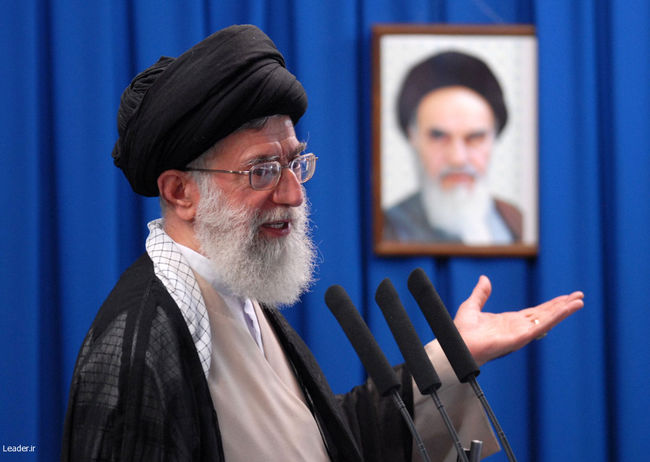 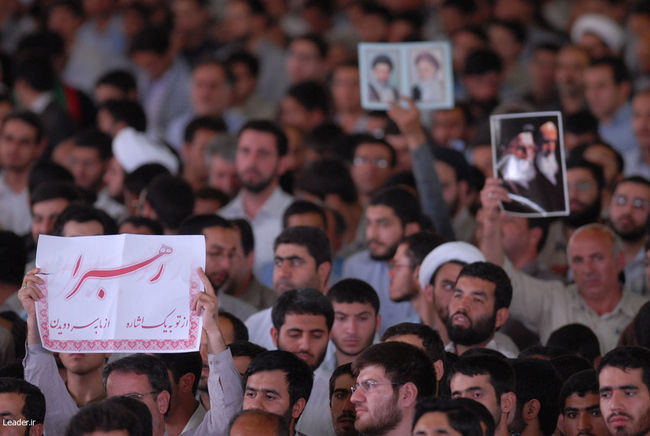 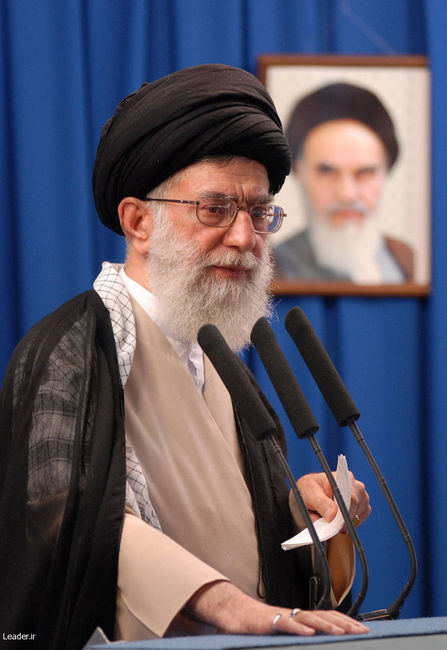 Ayatollah Khamenei said the exceptional and epic turnout in the June 12 elections was a great show of trust and hope on the part of nation, a political earthquake for enemies and a historical celebration for friends of Iran and the Revolution.

Ayatollah Khamenei said all the 40 million people who turned out for ballot have actually voted for Imam, the Revolution and its martyrs, adding that the four competing presidential candidates belong to the Islamic establishment and therefore they are going to have to pursue their electoral issues within the existing transparent laws and regulations.

Ayatollah Khamenei highly appreciated the magnificent turnout of people at the ballot boxes and called it a large show of responsibility and participation, adding that the epic solidarity of the people with the Islamic establishment and the exceptional 85 percent turnout in the elections was a blessing from God and a sign of attention from the Last Shii Imam, Hazrat Mahdi.

Ayatollah Khamenei said the enthusiastic presence of the youths in the tenth presidential elections proved that political responsibility was still alive in the young generation. He then offered his heartfelt gratitude to the nation for the large turnout.

The IR Leader then pointed to the existence of different opinions and tastes within society, adding however that behind all those different tastes, there was a collective responsibility for preservation of the country and the system.

Ayatollah Khamenei said the 40m vote was a national declaration of loyalty to Imam, the Revolution and the Martyrs, adding that by the large turnout, the Islamic System took a fresh breath and the ill wishers of the system was slapped with the true concept of religious democracy.

Ayatollah Khamenei warned that the enemies of Islam seek to instill doubt into elections and shake the national trust. "They seek to question the legitimacy of the system through erosion of participation. If they manage to gain the goal, the incurred loss is larger than any other losses," Ayatollah Khamenei cautioned.

Ayatollah Khamenei said the intense electoral campaigns between the four candidates, including the TV debates, were something within the system though the Zionist-ruled media with shear lies tried to present them as fight between opponents and proponents of the system.

Ayatollah Khamenei then noted that difference of opinion was natural, adding however that he considered a certain platform more appropriate for the country though he never made his vote public because the elections belonged to all people and its results would be determined by people.

Ayatollah Khamenei described the presidential TV debates as a significant initiative, saying that the serious and transparent debates foiled the plot of the aliens who claimed the polls were a show.

Ayatollah Khamenei said the debates were positive in that the debating sides had to defend their own platforms in the face of a flood of criticism, adding that the people through the debates and other special TV programs could judge their vote and felt that the Islamic establishment considers them as insiders.

Ayatollah Khamenei then said that one of the factors behind a ten million rise in the regular size of turnouts in the elections was the debates which helped people engage in the election campaigns.

The IR Leader then called for the continuation of the TV debates at levels of country's managers, adding however that there were also some negative issues in the debates which must be removed in future similar programs.

Regarding the negative issues, Ayatollah Khamenei said that the debates contributed to more political schism and rumors and was lagging in logical issues. "Unfortunately the debates were defamatory at some points so that they relegated to blackening of the services of the current administration or previous administrations and stirred the situation among the supporters of the candidates," the IR Leader regretted.

Ayatollah Khamenei then pointed to some defamatory statements in the debates about Mr. Hashemi Rafsanjani and Mr. Nateq Nouri, adding that while no one points an accusatory finger at the two personalities, any other claims about the relatives of the two must not be made public before due legal proceedings are covered.

Ayatollah Khamenei then pointed to his fifty-year-old relationship with Mr. Hashemi and elaborated on his services to the Revolution and the System, adding that Mr. Hashemi has never collected any money out of the Revolution.

Ayatollah Khamenei however noted that he has some natural difference of opinion with Mr. Rafsanjani, adding that the differences also existed between Mr. Rafsanjani and President Mahmoud Ahmadinejad since 2005, noting however that Mr. Ahmadinejad's platform was closer to his.

Ayatollah Khamenei then considered Mr. Nateq Nouri as a personality who has always been in service of the Revolution.

Ayatollah Khamenei then reaffirmed the serious stance of the system against financial corruption, adding however that the Islamic System despite the claims of some Zionist bodies is among the healthiest establishments in the world.

Ayatollah Khamenei then turned to the June 12 elections and said the enemies try to cast doubt on the elections and turn an absolute victory into a national loss however the highest rate of turnout has already been registered for the Iranian nation and the reality would never change.

Ayatollah Khamenei added however that the Constitutional Guardian Council had been instructed to consider any evidence of fraud provided by the complaining candidates and recount those boxes which are deemed necessary in the presence of their delegates.

Ayatollah Khamenei said legal routes are sole way for the consideration of electoral complaints, adding that he would never accept any illegal precedence because if today the legal framework is breached, no other elections would be trustworthy in future.

Ayatollah Khamenei said the legal procedures for consideration of electoral complaints are fine and complete, adding that all electoral issues should be tackled through legal routes.

Ayatollah Khamenei then addressed politicians and party leaders, saying that the country was experiencing a sensitive juncture and that considering the situation of the world, everyone has a duty to keep vigilance and avoid any mistake.

Ayatollah Khamenei warned that any extremism would stir further extremism, adding if political elites violate the law, they are to blame for any ensuing violence or unrest.

"I recommend all my old friends and brothers to overcome their sentiments and view the hidden hands of enemies and hungry wolves which gradually shed their mask of diplomacy," the IR Leader urged.

Ayatollah Khamenei said the ballot box is the point where all differences must be settled and that the street is not a point to determine the vote of people.

Ayatollah Khamenei also warned that street protests are an appropriate cover for terrorists, enquiring who may take responsibility if terrorists carry out acts of terror within such meetings.

Ayatollah Khamenei noted that political weighing in the streets actually challenges the very democracy and elections. He then urged all parties involved to end the wrong political method, adding that if they fail to end the street protests, the responsibility of consequences falls on the organizers and parties involved.

Ayatollah Khamenei also noted that street protest never work as a pressure tool on the System and would fail to to make it to give in to their demands as expediency "because caving in to illegal demands under pressure would usher in dictatorship."

"These calculations and perceptions are wrong and the behind-the-scene commanders are to blame for any consequences. The people will know those commanders when due," the IR Leader cautioned.

Ayatollah Khamenei then urged the parties involved to take the path of fraternity and understanding and appreciate the 40m vote celebration by not allowing the enemy to ruin the large celebration. He however warned that if some people want to go a way otherwise he will come back and speak to people, this time in a more straightforward manner.

Ayatollah Khamenei then raised a series of stances taken by the authorities of some European countries as well as the United States, saying that in the run-up to the elections, the western authorities and media tried to trigger a voter apathy nevertheless they were shocked by a 40m turnout which made them to realize that a new chapter has opened in the issues related to the Islamic Republic of Iran which must be inevitably accepted by them.

"They then tried to ride the wave of protests following the elections and gradually pushed aside covers from their true face. Some of them showed their enmity with the Islamic System and the British Government proved more wicked than others in this regard," Ayatollah Khamenei said.

Ayatollah Khamenei then pointed to a statement by some US authorities that they were waiting for such days when people took to streets. "These remarks came out after they sent a message in which they expressed willingness for relations and respect for the Islamic Republic; which one could we believe?"

"Simultaneously foreign elements triggered a line of destruction, arson, pillage of public wealth and unrest; they have no link to people or supporters of candidates rather they are related to ill wishers of the Iranian nation and mercenaries of western and Zionist spy services," Ayatollah Khamenei said.

Ayatollah Khamenei said the situation made the enemies to feel greedy so that they thought they could spark a velvet revolution in Iran as they did in some small countries with a few million dollars paid by a Zionist capitalist. "The main problem is that the ignorant enemies have yet to know the Iranian nation," Ayatollah Khamenei said.

"The ugliest issue was the expression of sympathy by American authorities for human rights and their claim of tightening of situation against Iranian people. How those who committed such and such crimes in Afghanistan and Iraq and support the bully Zionist regime allow themselves to profess to cherish human rights?" Ayatollah Khamenei asked.

Ayatollah Khamenei in the same regard reminded the conduct of the Democrat administration of Clinton in the massacre of more than 80 people of the Davidian sect. "You burned more than 80 women, men and children alive. So how could you understand human rights?" he asked.

Ayatollah Khamenei then noted that the Islamic Republic has hoisted the flag of human rights and defense of the oppressed and that it has no need to take advice from the West in this regard. "Western authorities must take shame and abandon their current policies" towards Iran, he added.

Ayatollah Khamenei concluded the speech by making an address to the Last Shii Imam, Hazrat Mahdi, saying "we have done what needed and said what needed and will do. We would stay the course powerfully. You are the true owner of the Revolution and Country. Please, pray for us."